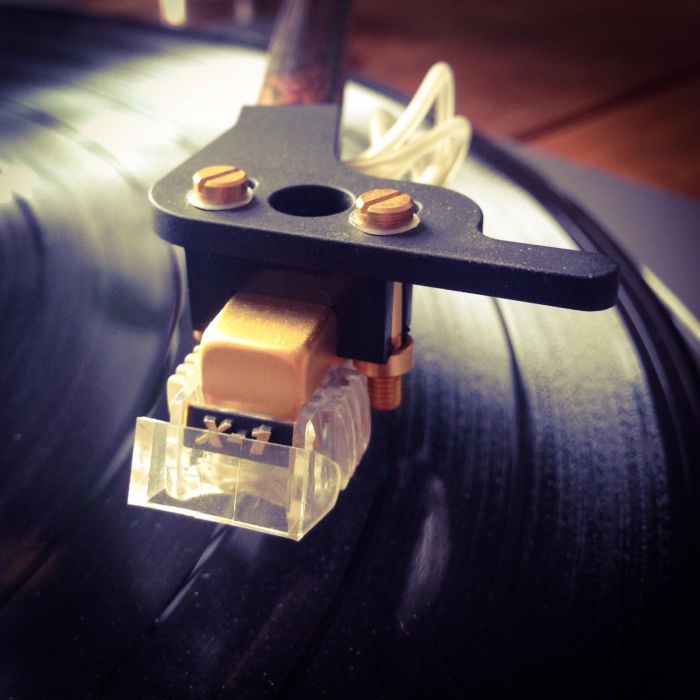 The choice of a cartridge for JVC's CD-4 quadraphonic discs is straightforward. If you have the budget, and can guarantee that a new stylus can be sourced, go for a cartridge designed specifically for CD-4 from the 1970s.

The requirements for the transducer for CD-4 varies sufficiently from that for normal stereo replay that the ideal pickup is one that was made for the job.

Take an early example of a cartridge made explicitly for CD-4, JVC's X-1. The design and performance of this cartridge is exceptional - even by contemporary standards (see specification below).

Audio Technica also made a line of CD-4 cartridges in the 1970s, all of which had - and still have - a good reputation, particularly the AT15Sa and AT20SLa.

Enthusiasts who remember CD-4 Quadradisc from the day, swear by a series of cartridges made by Technics, the: 450c; 451; and the 460. These cartridges are all semiconductor, displacement-sensitive types. All are very expensive today and require a special preamp but, no doubt, these provide a unique, wideband transducer, far removed from today's technology.

It's not so much that these cartridges are better than modern types, just simply that the role as a transducer of CD-4 FM tracks is not something which has occupied the mind of phono cartridge designers for, at least, the last forty years. HF separation of better than 20dB, frequency response to 60kHz and so on are just not the "tick boxes" modern product managers demand of their R&D departments!

Some of today's CD-4 fans use the modern Audio Technica AT440ML cartridge with reportedly good results; although this is only anecdotal evidence as no measurements seem to have been published to support this. In any case, the AT440ML is now obsolete anyway; replaced by the VM540ML. The CD-4 performance of this replacement is not known.

Often cartridges seem to be judged simply by the presence (or not!) of the RADAR light on the CD-4 demodulator. This is a simplification. Whilst, sufficient carrier level is a prerequisite and a good place to start, the frequency-response (and group-delay) variation of the cartridge thoughout the CD-4 FM band (15kHz - 45kHz) needs to be reasonably level. And the inter-channel crosstalk needs to be certainly better than -12dB and preferably better than -20dB. All these parameters need to be known to extract the maximum information from the CD-4 disc.

What about moving-coil phono cartridges?

Moving-coil (MC) phono cartridges and CD-4 records seem to have passed each other in the revolving door of fashion. By the time the dominance of the moving-coil type cartridge was established the upper end of the phono pickup market, CD-4 was well past its acme, and hardware demodulators rarely (if ever) seem to provide a suitable front-end amplifier for MC cartridges.

Similarly, in a comprehensive review of a group of MC cartridges from just after the heyday of quad1, a review which includes testing of extended frequency response and crosstalk, no mention is made as to the suitability of the various products for CD-4: only stereo is considered.

Certainly, MC cartridges exist which would suit CD-4 records with stylus resonances high enough to keep response and crosstalk under control in the frequency range of CD-4 difference information. Indeed a couple of models in reference 1 demonstrate suitability. (Although, interestingly, not the model from JVC - the MC-2 - which is most unsuitable. This model superceeded the MC-1 which had a Shibata stylus and a frequency response to over 50kHz. So, it seems CD-4 was truly dead even for JVC by 1979).

Cartridge aside, a real issue with moving-coil pickups for CD-4 lies in the need for greater voltage-gain. This is typically achieved with extra preamplifier stages or step-up transformers prior to the normal RIAA equalising circuit. In either case, the bandwidth of this extra gain-stage is often curtailed. Transformers rarely offer a flat frequency-response greatly beyond the audio band, and all-electronic MC preamplifiers often employ deliberate bandwidth restriction lest the pickup becomes sensitive to radio frequencies (RF).

The CD-4 format demands a transducer bandwidth some three times greater than that required for normal records and this requirement is rarely a consideration to the modern designer who is more concerned with establishing immunity to mobile-phone (GSM buzz) signals and the like. In addition, few historical hardware examples exist of MC type pickups for CD-4. The Ortofon SL15Q is a rare example2. So, considerable experimentation is required to determine if a MC cartridge and preamplifier are suitable for CD-4 needle-drops. 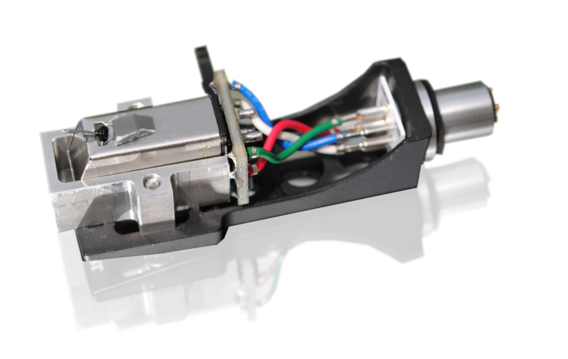 The advantage of an active cartridge is that the pickup coil inductance is isolated from the cable capacitance by a buffer amplifier and this extends the frequency response so that total response variation over the 15kHz to 45kHz band is measured as ±2dB relative to 1kHz. Crosstalk is notoriously difficult to measure as no reliable test-discs are available for wideband crosstalk measurement.

The Phædrus Audio's PHLUX-II Libre active phono cartridge was therefore assessed using the Shure Brothers square-pattern crosstalk test3 and found to offer no better than -11dB interchannel crosstalk. Without compensation this is not acceptable for CD-4 use.

However, crosstalk is a linear process and may therefore be corrected as a straightforward linear process within the software processing. If this is done for the PHLUX-II cartridge in Stereo Lab, it is possible to reduce crosstalk to better than -26dB as witnessed by the Shure square-pattern analysis (illustration above). Essentially, the Shure test indicates the presence of crosstalk as a modification of a perfectly square, perfectly upright Lissajous pattern when the two subcarriers are viewed on an audio goniometer. The left hand image in the illustration above indicates the lack of independence of the left and right subcarriers directly from the PHLUX-II cartridge: the pattern is distinctly rhomboid. After software processing, the result is the right-hand trace: not perfect, but a lot better.

The difference this reduction in crosstalk makes is very significant in terms of the distortion generated in the FM discriminator stages as this audio clip demonstrates. The first half is the output from the FM demodulator (before noise-reduction etc.) using the PHLUX-II cartridge without correction. After the beep, the same audio clip is demodulated with crosstalk compensation.

2. The Ortofon SL15Q was a variant of Ortofon's long-lived SL15 range. A MC cartridge made especially for CD-4 playback, the frequency response was wide enough for CD-4, but channel separation was only an unsatisfactory 15 dB at 30kHz. The SL15Q was sold with a matching step-up transformer (Ortofon STM75). The stylus resembled that of the Shibata but was of Ortofon's design, rather as the Pramanik variant of the Shibata was developed by an engineer at Bang & Olufsen. It is very rare to see this cartridge and its matching transformer today.