There have been many studies of the illusion of the spatial sound-field produced by two loudspeakers, but one of the best, because of its good, clean technique, its reference and corroboration of earlier studies, its understanding of all the relevant perceptual mechanisms, and its useful mathematical models for further work was produced by D.M. Leakey in his PhD thesis and - in a shortened form - in a paper published by the JASA entitled, Measurements on the Effects of Interchannel Intensity and Time Differences in Two Channel Sound Systems (JASA Vol 31, Number 7 July 1959.)

Because of the different mechanisms involved in the perception of high-frequency and low-frequency sounds, Leakey studied the apparent position of a sound image for a given interchannel intensity difference with different types of material grouped into low-frequency stimuli:

His results corroborate the findings of all other researchers and illustrate that, for a similar interchannel intensity difference, the position of a high-frequency sound and a low-frequency sound are different. His experimental set-up is illustrated here.

Leakey demonstrated for example that, for a high-frequency stimulus to seem to come from position R1 or R7, a channel intensity difference of 12.4dB was required. A low-frequency stimulus however, required a difference of nearly 5dB more to appear to come from the same position. (Leakey also notes that the standard deviation in his group of listeners was a small 1dB in each case - demonstrating that the "stereo illusion" was consistent between subjects.)

The EMI team who developed Blumlein's patent into a practical stereo system after the war that killed its inventor found the same phenomenon but were unable to explain what might be causing the differences between imaging at low and high frequencies. Their solution was empirical and practical - after all, their aim was not to win academic plaudits, but to develop a commercial music recording system.

where R and L represent the untreated stereo signals and L' and R' represent the post processed signals. In the EMI equipment (and this was used right through the nineteen-sixties as documented in the seminal study of EMI's Abbey Road studios technical gear, Recording The Beatles), the matrixing was done in balanced, transformer circuits. The filters and phase-compensation circuits are illustrated below.

This network is the famous Stereosonic-shuffler which was an integral to all the REDD consoles (REDD.17, REDD.37 and REDD.51) at EMI's Abbey Road studios and other studios around the world. (Do not confuse it with the binaural shuffler developed by Blumlein and referred to in his 1933 Patent.) 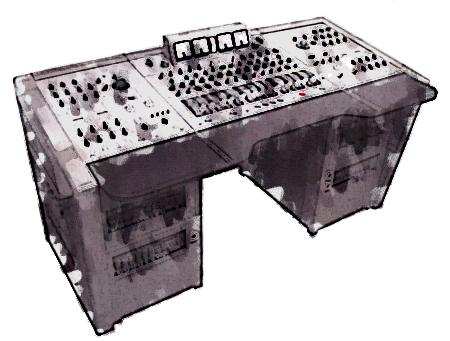 The famous EMI REDD.51 console... "The Beatles console". Inexplicably dumped in the early nineteen-seventies, none of the Abbey Road machines has ever surfaced.

It's important to note that EMI regarded the "Stereosonic shuffler circuit" as an indispensable part of a stereo system, straightforward panning was not considered appropriate without frequency compensation. As the REDD.51 manual states,

And this is the important point:

Channel-intensity panned stereo mixes, stereo recordings made with crossed cardioids and cosine (figure-of-eight) microphones, and those made with ORTF and NOS pairs are all "broken" without modification of the channel intensities with respect to frequency.

A visual analogy of the effect is illustrated below, which shows how, as the sound image gets further from the centre, it is split into non-coincident, high-frequency (blue) and low-frequency (red) spatial components.

The REDD team who developed the Stereosonic mixers for EMI was disbanded several years before the REDD mixers were disposed of by EMI by the stroke of an "EMI accountant's pen" (see Recording The Beatles), to be replaced with TG12345 consoles. No one knows what happened to the REDD consoles from Abbey Road; although, happily for posterity, one example still exists - from EMI's Milan studios - in a private collection. The Stereosonic Shufflers, of course, went with the REDDs, and with them the foundation work done by Blumlein, Clark, Dutton and Vanderlyn on the necessary corrections for stereo.

To be fair, the Stereosonic Shuffler filters had gradually fallen into disuse with engineers even before the REDDs were disposed of; partly out of misunderstandings and ignorance, and partly because of colouration artefacts which they introduced as a consequence of the implementation and the almost impossible requirement to match group-delay in the sum and difference channels; leading to comb-filter effects when matrixed back to L' and R' signals.

In the nineties, Richard Brice suggested an alternative to the EMI shuffler which implemented the same effect by means of inter-channel crosstalk (Brice, R. (1997) Multimedia and Virtual Reality Engineering. Newnes). This, usually unwanted, signal process caused the same narrowing of the HF image with respect to the LF image in a simple circuit incapable of introducing other frequency response distortion artefacts. This filter became available in various forms, all under the product name FRANCINSTIEN, a monstrous acronym of,
FRequency-dependent, ANalogue Crosstalk Injection Network for STereo Image ENhancement.