Because tape recorders were aligned to various international standards, with a especially clear division between American and European practice, there always exists the possibility of a recording made on a machine aligned according to one standard will be replayed on another aligned to a different standard. The tape-equalisation correction filters in Stereo Lab are designed to compensate for the frequency-response anomalies which result from these mismatches, so that a poor transfer may be corrected swiftly and accurately. 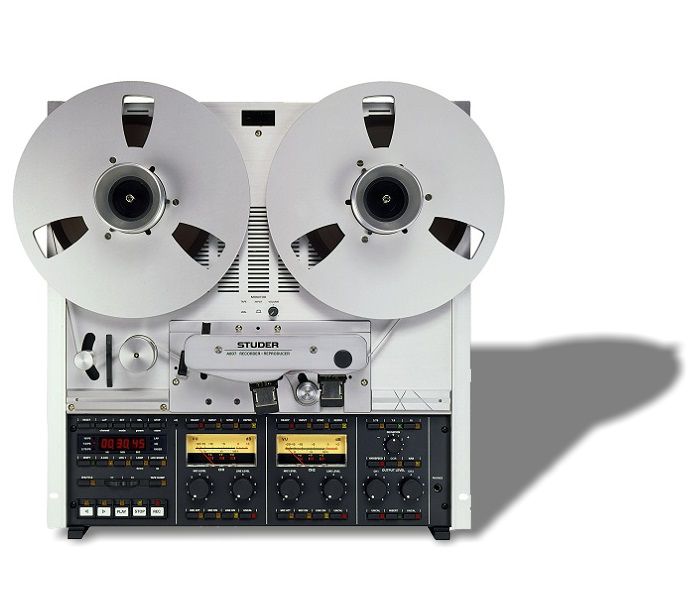 Equalisation of any analogue tape medium results from the requirement to compensate for limitations in the medium itself. These limitations are a function of linear tape speed so that equalisation varies according to the standard tape speeds of: 30 ips*, 15 ips, 7.5 ips, 3.75 ips and 1.875 ips. This simplifies the number of possible mismatches because, although a sizeable range of equalisations exist, the permutations are limited to the EQ choices at a given speed.

Before looking at the details of the equalisation curves, a note about terminology. Tape equalisations are usually referred to by the initials of the standards organisation publishing the standard. But, there is possible confusion here because the various standard bodies have changed their affiliations, names and responsibilities over the years. The main protagonists are: the International Electrotechnical Commission (IEC); the American National Association of Broadcasters (NAB) and the Audio Engineering Society (AES), the European Comité Consultatif International pour la Radio (CCIR, now called the ITU-R), and the Deutsches Institut für Normung (DIN).

For a long time the principal divisions in approach and standards existed between the American NAB and the European bodies. Historically, the Europeans turned over their tape recording standards writing to the International Electrotechnical Commission (IEC) fifty years ago. So CCIR and DIN standards were absorbed into IEC standards relatively early in our story. Thus, it is common to see two standards choices at, for example, 15 ips referred to as, "IEC or NAB". But America eventually joined the IEC too, so the American standards were too absorbed by the IEC. This led to the modern nomaclature that CCIR = DIN = IEC1 and NAB = IEC2.

Nature of the equalisation

An audio tape which has been recorded with a constant-current signal to the record head at all audio frequencies will result in a constant flux-density imprinted on the tape at all wavelengths. However, the electrical signals derived from the replay head in a tape player will not demonstrate a voltage which is the same at all frequencies. Instead, constant flux density on the tape produces a replay head voltage which demonstrates a rising characteristic (at 20dB/decade). Just like the electrodynamic phono cartridge, the faster the magnetic flux changes, the stronger is the induced signal in the replay head - in line with the classical laws of electromagnetic induction.

Thus the signal induced is proportional to frequency and more gain must be applied in the preamplifier as the flux-changes get slower and slower (i.e. as frequency decreases). For this reason, the equalisation response of the tape player must have a falling response as illustrated below, usually since the signals are small, with a very great deal of amplification at the lowest frequencies5.

However, due to certain physical reasons relating to the wavelength of the signals recorded on tape, the playback head signals have a limit to their rising response and the equalisation must flatten out at the frequency when this phenomenon manifests itself. The frequency at which this transistion must take place is specified by a time-constant (in μS or microseconds) and is termed the high roll-off time-constant.

The wavelength of the patterns of magnetism recorded on a magnetic tape are a function of tape speed with the wavelengths being shorter at lower speeds. Thus, the differences in the equalisation standards principally involve differences in the point in the frequency range when the preamplifier response must return to a flat characteristic. The various time-constant values (and the frequencies) at which the characteristics flatten-out are illustrated in the figure (right).

Just as with disc recording, European and American engineers had rather different ideas as to the appropriate time-constants at various tape-speeds.

The unfortunate term bass-boost is commonly employed to differentiate between US and European equalisation practice in the lowest reproduced octaves. The term is misleading because all tape equalisations consist essentially of bass-boost. The extra "boost", to which the term relates, is applied on the record side where it was added to reduce hum and LF noise on the reproduction side (where the bass response is commensurately cut). An exactly similar phenomenon exists in gramophone disc equalisation, where the technique on the replay side is known by the rather more sensible term of bass-shelf which we have adopted here5. 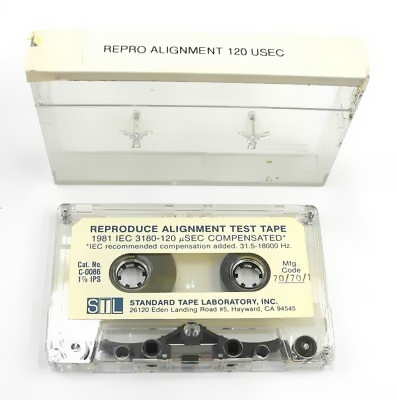 This is an area where standardisation between different manufacturers is particularly important because, without it, tapes recorded on one machine would not be reproducible on another.

In itself, this would not be such a problem were it not for the fact that, due to differences in head geometry and construction, the electrical equalisation differs markedly from manufacturer to manufacturer. 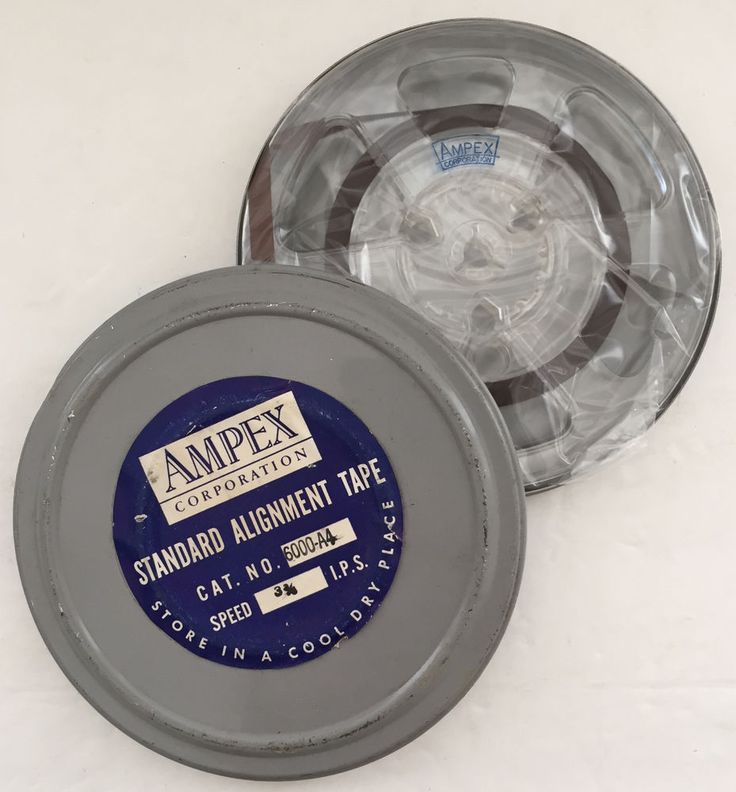 In Europe, the International Electrotechnical Commission (IEC) provided an ingenious solution to widespread standardisation by providing a series of standard pre-recorded tapes on which are recorded frequency sweeps and spot levels. The intention being that these must be reproduced (played back) with a level flat-frequency response characteristic; with the individual manufacturer responsible for choosing the appropriate electrical equalisation to effect this situation.

A similar standardisation role was performed in the United States by the industry association, the NAB (American National Association of Broadcasters). Broadcasters led the way because the networks had a very real interest in ensuring that tapes distributed to their local affiliates played back with the correct frequency response.

The issue of the “portability” should not be overlooked. Any serious studio which still relies on analogue recording must ensure its analogue tape equipment is aligned (and continues to remain aligned) to the relevant standards. This, unfortunately, necessarily involves the purchase of the relevant standard alignment tapes: a tricky proposition today.

The table below lists the common formats and equalisations used in professional recording1. 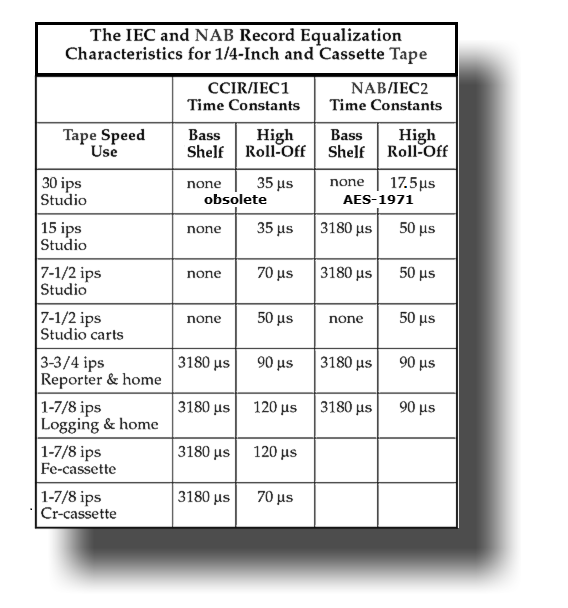 For tapes running at 30 ips, the only equalization now used is AES-1971 or IEC2. (There never was, an NAB standard for 30 ips.) There is thus very little scope for equalisation mismatches with tapes recorded at this speed 2.

As the table illustrates, at 15 ips, the European standard does not specify a bass-shelf and the HF roll-off is specified as 35μS. Whereas the American standard specifies a bass-shelf of 50Hz (3180μS) and a high roll-off at 50μS.

We can compute the error of such a mismatch with relative ease. At HF, the following equation applies:

And at LF we can compute the error by taking an educated guess at the practical bass-shelf chosen by the designer of the European equipment 3 of 8000 μS and applying this in the equation,

Tapes recorded at 7½ ips (19cm/s) offer similar scope for mismatched equalisation because, as shown in the table, different equalisations were commonly used in the USA and in Europe. Once again, the European standard does not specify a bass-shelf, the high roll-off is 70μS. The American standard specifies a bass-shelf of 50Hz (3180μS) and a high-roll-off at 50μS.

We can use the equations above to predict the tonal-balance errors; and they are different from their 15 ips counterparts. European recordings at 7½ ips played-back on an American machine will sound bass-lean (-8dB) and the treble will be muted (-3dB): the result being a bit "middley". Conversly, American recordings played-back on a European machine will sound boosted at bass (+8dB) and treble (+3dB). Once again, the errors are displayed graphically below.

There are references to an older, British equalisation of 100μS for 7½ ips tapes 4. Please let us know if you would like to see this conversion included in Stereo Lab. 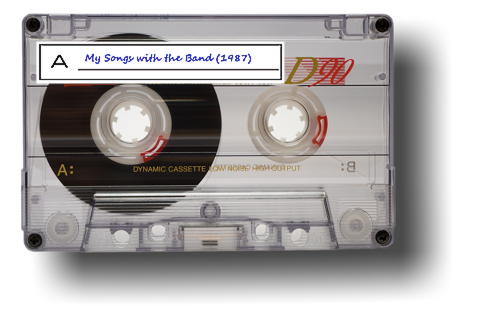 Ironically there was much better international standardisation of equalisations for lower tape speeds; presumably because of the consumer markets which drove these lower-quality formats. The humble cassette is exemplary in this regard.

The problem which plagues these lower-speed formats is not equalisation variations, but instead poorly aligned noise-reduction circuitry. In order for noise-reduction to work properly, the audio must be decoded at the correct reference level. This is often not the case in hardware tape recorders - especially with old cassettes. This accounts for the poor performance of many hardware implementations. The result is usually an unacceptable degree of treble-loss when the NR is engaged.

To that end, Stereo Lab also includes both Dolby A and Dolby B processing for noise reduction.

2 There are older 30ips European recordings on ¼ inch tape will have been recorded with the now obsolete IEC1 (DIN or CCIR) characteristic of 35μS high roll-off and with no bass-shelf. In other words, with an equalisation identical to the 15 ips IEC1 standard.

3 For there is always a bass-shelf, the European standards just omit to define it!

Pspatial Audio's friend Gert Willmann has pointed out that referring to the 100µS as "an older British standard" is only part of a more complicated truth because equalisation using this time constant was specified in all respective CCIR Recommendations from 1953 to 1963 and in the DIN 45513-3 Standards from 1955 to 1962.

DIN 45513-3 (1955) was a so-called "Vornorm" ('tentative standard' in English) and contained an accurate graph of this characteristic, which is equivalent with the graph in DIN 45513-3 (1962) where the 100μS was explicitly given. This characteristic was valid till 1966, when the CCIR changed this time constant to 70μS.

Moreover, Gert has found strong evidence that the same time constant was also specified in the IEC 60094 standards of 1957 and 1962.

5. The manner in which the playback equalisation is presented in the graph illustrated in the main text represents the frequency response modification of a perfect amplifier when presented with the signal derived from an standard electrodynamic tape replay head. In other words, it's (approximately) the transfer-function required of the replay amplifier. 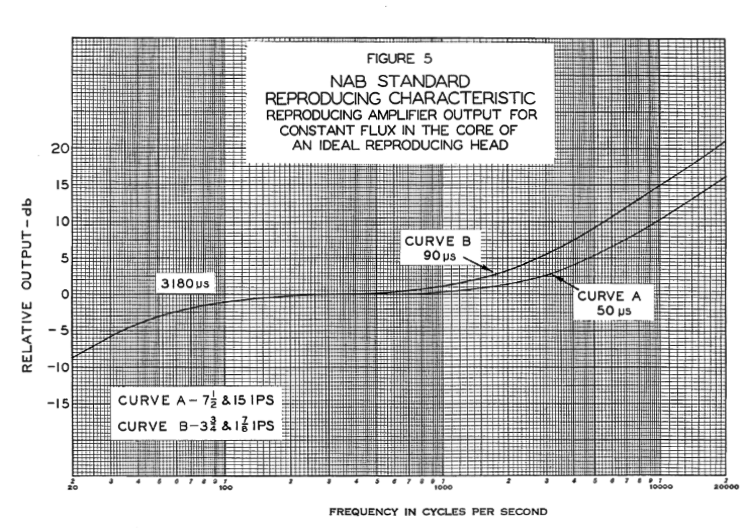 For reasons unknown this is not how this information is represented in the standards documents; for example, see the curve (left) which is taken from NAB MAGNETIC TAPE RECORDING AND REPRODUCING STANDARDS REEL-TO-REEL (1965). In this graph, the specified frequency response of the replay amplifier is specified assuming a signal derived from the replay head presented with a rate-of-change of flux which is constant at all frequencies; in other words with a signal with a rising response.

Both are equally correct of course - except that it seems unnecessarily confusing to specify an electronic transfer-function in this way.

Comparing the two, it will be seen that the upper graph is simply the equivalent of the lower but tipped 45° clockwise.

At least, viewed in the way presented in the standards documents, the term "bass boost" on the recording-characteristic side makes more sense.