It is an irony that the majority of tonearm design is concerned with imperfections with gramophone (phonograph) records. The veteran, British hi-fi designer John Wright explained it like this,

From the point of view of an ideal pickup cartridge the tonearm is merely a necessary evil. Apart from fulfilling the simple function of support, the tonearm can do nothing but interfere.....The tonearm for the ideal cartridge can be envisaged as an inertia-less, parallel tracking device with zero friction¹.

The issue of low inertia is covered elsewhere in these help files, as is the issue of lateral tracking. This page looks at the pursuit of the lowest possible friction via the use of a unipivot support bearing.

A gimbal is a pivoted support which allows an object to rotate in one axis. By far the most common design of phonograph tonearms employs two sets of orthogonal gimbal bearings at the balance point of the arm. One such design, as seen on the famous Technics SL-1200 turntables, is illustrated right.

The quality of the gimbal bearings is very important: they must possess a very high surface-finish, to offer minimum friction, and minimum play which would cause the arm to rattle in the bearing; an effect called chatter. A common (and excellent) bearing arrangement is an adjustable tapered pivot sitting with its apex in a miniature ball-race. The adjustment allows the production technician (and later perhaps the user) to tighten the bearings so as to take up slack which would cause chatter to the point just below where bearing binds. This adjustment is - of course - always a compromise. And, over time, the bearings will inevitably wear and go out of adjustment.

From a mechanical point of view, the less the contact area of the moving surfaces compatible with bearing the load, the lower the friction. Thus, the unipivot tonearm seeks to reduce friction to a minimum by replacing the four bearings in the gimballed arm with a single bearing upon which the arm balances (as shown left).

In the illustrated design, the tapered pivot, sitting with its apex in a miniature ball-race, is similar to the gimballed arm bearing, but this single bearing is the sole point of support for the entire arm assembly: arm-tube; cartridge; and counterweight. Not only is the bearing surface area reduced in the unipivot design but, with the weight of the tonearm supported by the bearing, it is automatically adjusting so that chatter can never be a problem.

The design illustrated is due to Frank Ockenden and John Wright¹. Despite its 50 years of age, it still represents a "contemporary" unipivot design. The idea of the unipivot dates back to before electrical recording and the first unipivot for electrical reproduction was made by Cosmocord about 1930². The fundamental simplicity of the unipivot has always ensured its popularity with experimenters and amateur arm builders¹ ³.

The unipivot tonearm is not without its own compromises. As well as allowing freedom of movement in the wanted vertical and horizontal directions, the single point-bearing also permits torsional movement and herein lies the snag. Inherently, the design has no torsional rigitity: the arm can rock (or flop) on the bearing so that the design is vulnerable to twisting effects due to handling and to static and dynamic imbalance.

Even the fine, signal cables can impart a torque as they leave the tonearm causing the unipivot design to flop to one side, so that unipivot arms are often characterised by rather elaborate lead-dress arrangements for the signal wires to circumvent these tiny torque effects on the bearing. Ockenden and Wright's design¹ went so far as to arrange that the four signal terminals in the arm terminated in stanless-steel pins which ran in four, miniature baths of mercury surrounding the pivot; thereby eliminating wire contacts altogether between the arm and the base.

In short, the challenge of a practical unipivot design is in constructing a design which is torsionally stable.

As the inventor of a unipivot tonearm design³ wrote,

It is a saddening sight to see an arm tracking out of torsionial balance with its head leaning heavily to one side, rather like a cow with ear-ache, [and] an alarming experience to witness an arm rocking violently from side to side while trying to cope with a warped record.

These effects are due to lack of torsional balance and inertia respectively. Designers have resorted to various devices to bestow acceptable levels of torsional stability to practical unipivot designs.

Static torsional balance is easy to accomplish and simply demands that the various masses that comprise the tonearm are established equally either side an axis from the pivot to stylus-point. Any imbalance around this axis will create a couple which will cause the arm to tip in the direction of the greater mass. Once statically balanced, extra (equal) mass may be added either side of the pivot point to increase torsional inertia which helps with dynamic stability.

That the unipivot bearing must be physically above the centre of gravity of the tonearm is obvious - otherwise the arm would topple off the bearing! But the degree to which the centroid is arranged to be below the bearing point is a major design decision in the unipivot arm.

If the centre of gravity is just below the bearing, the arm may be disconcertingly wobbly and difficult to cue. If the centre of gravity is low and the arm is said to be in stable balance, handling stability is gained at the expense of a tonearm which creates instantaneous changes in stylus force when the arm is lifted by an uneven record surface; creating a tendency for the needle to dig into the record when experiencing a record warp.

Sometimes the unipivot bearing is "assisted" with a further bearing collar (which fits over the unipivot pin) and slot in the lower face of the hub which contrains the tonearm's movement to horizontal and vertical rotation; thereby affording the torsional stability the naïve unipivot lacks. Generally metal-metal contact is avoided for this type of contrivance: a combination of metal and an engineering thermoplastic like polyoxymethylene (POM) is preferred. Clearly, this is cheating a bit because a second bearing surface has been added and these designs are therefore termed false or constrained unipivots.

In Ockenden and Wright's design¹, the tonearm would be very unstable and "wobbly" were it not for the bath of viscous silicon fluid in which runs the inverted cup of the housing bearing. This damping provided by the fluid ensures the arm's stability with almost no effect upon the lack of horizontal friction in the unipivot bearing; a very clever stratagem. 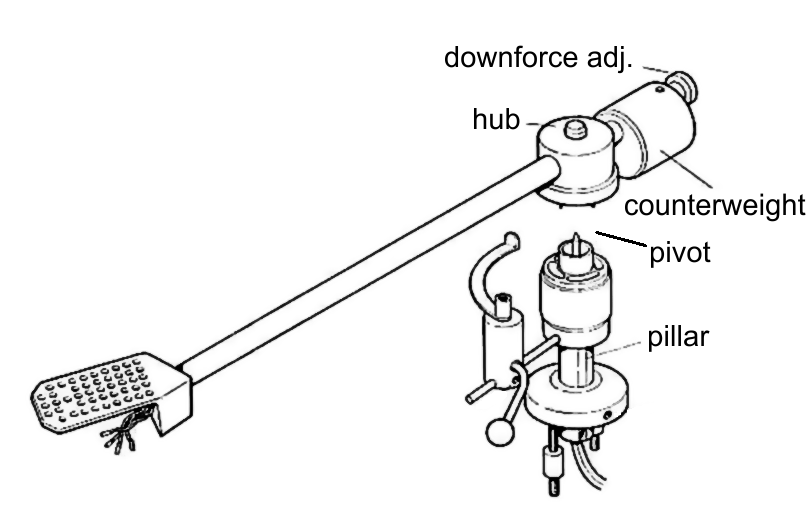 Whilst it's possible to design practical unipivot tonearms with excellent performance, it's difficult to extol their advantages for the record archivist - certainly one who is dealing with a variety of media.

The ability to select a particular track with ease is of great help to the archivist, but the general physical instability of this type of arm makes it much more difficult to cue than the standard gimballed arm. And a unipivot is more or less impossible to hand cue.

The "wobbliness" of the unipivot design can also make cartridge change and alignment very tricky. When dealing with a variety of media, the ability to change cartridges and styli quickly and reliably is an important consideration.

Lastly, unconditional dynamic stability of a unpivot design may not be relied upon when tracking compromised or damaged media - especially at higher record speeds. This too is a requirement for the archivist.

The unipivot concept seems to tonearms what the Rotary (Wankel) engine is to internal combustion engines. The excellence of the concept is plain for all to see: but the devil in the practical details has kept it from becoming the dominant technology. ⬛

1. An approach to pickup arm design. Wright, J.S. Wireless World April 1967. The design described in this article was commercialised by Keith Monks after John Wright's Audio & Design company foundered in financial difficulties at the turn of the 1970s.