The mighty RCA spent considerable time and investment in consideration of the the problems of the wear of CD-4 records well after they had launched the technology as a commercial medium. The results of extensive testing and development programme to develop a single-inventory stereo/CD-4 record material is recorded in a JAES paper by Bogantz and Khanna, both of RCA's Record Engineering division in Indianapolis1.

Quite the contrary; here is an excerpt from their paper,

We were rather quickly able to determine that existing stereo compounds were totally unsuited to the task [of single-inventory stereo/CD-4 records] on several counts. We had hoped to be able to play a QuadraDisc upward of 100 times on a consumer phonograph equipped with a 0.7-mil radius conical stylus tracking at about 5 grams and then be able to get acceptable performance from the disc on a CD-4 playback system....... Most stereo compounds failed miserably..... After only five or ten plays on the consumer phono, the quad performance of the disc was unlistenable.

The images below (from Bogantz and Khanna's paper) illustrate the effect of 100 plays of a standard production CD-4 record with a 2g Shibata stylus (left) and just 25 plays with a 4.5g conical stylus (right). The damage to the carrier from the conical stylus tracking at 4.5g is clearly permanent. The stylus has galled the groove so that the FM modulation, in Bogantz and Khanna's words, is "buttered over" and effectively wiped out.

Worse still, the authors confirm that damage to CD-4 discs made with standard stereo formulation plastic is not limited to plays with a stylus tracking at 4 grams or more. They make the candid point that they believe it a "physical impossibility" that a conical or elliptical stylus (even tracking at 2g) would not permanently damage the CD-4 FM information due to the much smaller vertical bearing radius of the conical, or elliptical type.

The moral of this is clear. Never play any CD-4 disc except with a Shibata-type* stylus.

The authors explain that the best that could be aimed for was to research and develop a new PVC compound especially for CD-4 discs in which the wear by a non-CD-4 stylus was restricted to a narrow trench which a Shibata stylus could bridge in subsequent playings. Results of 100 plays from Shibata (left) and conical at 4.5g (right) using the new RCA plastic formula are illustrated below. 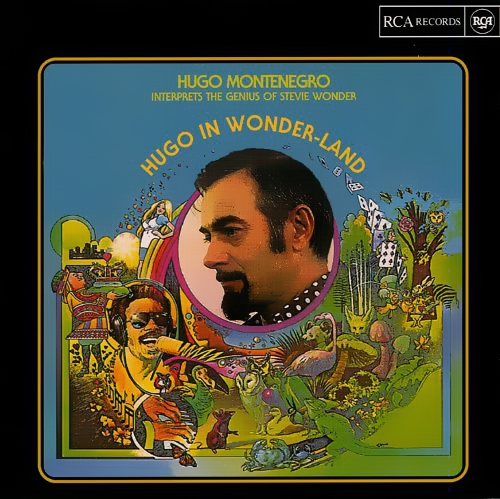 Timeline for the introduction of the new formulation

In a paper given at the 49th AES Convention in September 1974 (Discrete 4 Channel Records a Quest for Artistic Freedom), Rex Isom who was Chief Engineer of RCAs Record Division (and thus, Bogantz and Khanna's boss) identifies the International Music Industry Conference in London in May 1974 as the venue where the new RCA vinyl formulation was announced to the recording industry. The disclosure to the chemical industry was made in the following month.

This tallies with the date that the patent (US. 3,960,790) is filed for the new plastic on 25th March 1974 and with the widely held opinion that RCA Quadradisc APD1-0413 HUGO MONTENEGRO Hugo in Wonder-land (released early 1975) is considered to be the first release to use the new RCA CD-4 vinyl.3

Bogantz and Khanna stress that, although the new compound recipe was made publicly available to the plastics industry by the time of their paper, companies other than RCA were still pressing CD-4 releases with standard stereo compounds at the time of publication.

Given that the date of the Bogantz and Khanna paper is about the time that consumer and producer interest in quadraphonics was already waning4, 5, this leads to the inescapable conclusion that many CD-4 records available today are not made with the new RCA compound and may have been permanently and irretrievably damaged during their forty- to fifty-year life. Our own (limited) experience with CD-4 discs confirms this.

The chronology of the implementation of the new PVC composite for CD-4 illustrates that the short window between its introduction in mid 1974 and the virtual discontinuation of CD-4 product releases in 1976 represents the heyday of CD-4 software. It is not by chance that many of the most collectible releases in the format date from within this short space of time.

For the vinylista, the record-collector and archivist, the moral of this is clear. Never play a CD-4 disc except with a Shibata-type* stylus. Not only is this stylus-type required for reasonable reproduction whichever plastics formulation was used to manufacture the disc: but only this type guarantees that further plays are not adding to the accumulated damage should the disc be of an early formulation plastic.

*By Shibata-type we mean stylus profiles such as Obata, Quadrahedral, Pramanik as well as modern line-contact types all of which possess the essential quality of a large vertical bearing radius compared with the scanning radius.

1. Development of a Compound for QuadraDiscs, Bogantz G.A. and Khanna, K. JAES Jan/Feb 1975 (Originally given as a paper at the 49th AES Convention - September 1974)

3. An Audio magazine review of APD1-0413 (March 1975 p.78) the ex-RCA author (Ben Whyte) states, "Another plus is the excellent surface, a result of the new RCA record compound announced some months ago."

4. Rogers in Diffusion of Innovation (New York: Free Press 2003) tells us that by 1975 quad equipment sales were only running at 5% of hi-fi sales and that the number of quadraphonic recordings never got close to 5% of the titles available on the market. By 1975, the record companies that had offered four-channel products began dropping them, and stereo equipment retailers began selling off their inventories at a discount.

5. RCA themselves only released 11 CD-4 titles in 1976: Arista - a late entrant into the Quadraphonic world - produced ony 3 (including the notoriously difficult decode-test Barry Manilow's This One's For you): Electra/Asylum produced one title: and A&M and Atlantic produced none at all.