The initial implementation of the new decoder for CD-4 (RCA Quadradisc) in Stereo Lab has been well received. But there has been some debate regarding the "soft fail" approach taken by opting for an Ambisonics back-end matrix to the decoder.

Whilst incorporating Ambisonics permited the implementation a very reliable CD-4 decoder of a wide-range of media in a variety of condition, it does sacrifice the strong directionality of some CD-4 material.

It is not uncommon for some CD-4 productions from fifty years ago, to pan individual instruments in (for example) a quartet each to a different loudspeaker; a quad version of the "ping-pong" stereo of an earlier decade.

To modern ears this sounds eccentric and quirky but this hard-panning is apparently much admired by die-hard 1970s quadraphonic fans who are disappointed that the new decoder sacrifices channel separation for robustness.

The new Classic CD-4 decoder in Stereo Lab has been developed in response to requests for a decoder which more closely emulates the hardware decoders of the 1970s. The decoder decodes to the four loudspeaker regular-polygon loudspeaker layout which was popular in the heyday of "quad". The technical background to this decoder is given below.

The Classic CD-4 decoder is selected as a processes the main Quadraphonic Decode mode (see screen grab at top of page).

Here is a four channel FLAC file of the channel identification sequence on the JVC CD-4 test record decoded via the Classic CD-4 decoder. You will probably need to download this file and play in a multichannel application (like Audacity) unless your PC is configured for multichannel sound.

If distortion and noise are encountered when using this decoder: revert to the JVC CD-4 Quadraphonic option in the Quadraphonic Decode mode menu. 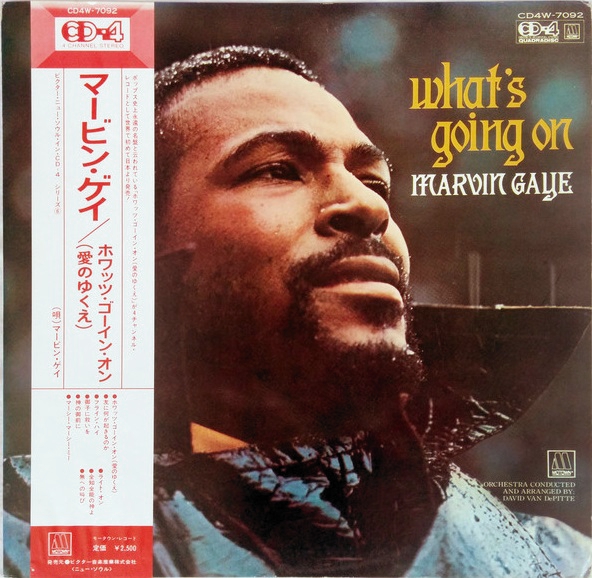 A needle-drop of a Japanese pressing of the CD-4 version of Marvin Gay's album What's Going On was provided to us for testing¹. The quality was simply a revelation. Never before had we been able to extract such high-quality signals from the FM tracks of a CD-4 record. For the first time we had a needle-drop which resembled our synthetic CD-4 test-signals.

We subsequently discovered that other Japanese CD-4 titles similarly surpass American mastered product and a glance at the needle-drop waveform in a DAW explains immediately why.

The increase in quality lies in the very conservative levels used for the baseband modulation. Due to this, the 30kHz FM signals do not suffer the various distortions and intermodulation which blight most CD-4 releases. The demodulated FM signals are clean and much more useable than was experienced in the development of the initial software CD-4 decoder.

The development of the new Classic CD-4 decoder is underwritten by the existence of these recordings. A short example of a non-equalised needle-drop of the innermost track of side 1 of What's Going On (CD-4 Japan) is given so that you can test the Classic CD-4 decoder. Mercy, Mercy Me.flac.

Why would there be such a difference in the way American discs were mastered? Might it be to do with the curse of single-inventory?

The Curse of Single Inventory

Emil Torick (who eventually became the Vice President of Audio Technology at CBS Laboratories) was head of the team that developed the rival SQ quadraphonic matrix system back in the 1970s. He gave an unconventional reason for the failure of quadraphonics in a paper he published in 1998².

Torick explained that the record-trade's insistence on single-inventory for stereo/quadraphonic discs meant that it became impossible to track quadraphonic vs. stereo sales. Further, so as not to punish stereo-only customers, it erradicated the price premium which quadraphonic products needed to command if they were to justify their increased production costs. Thus there was no viable business for quadraphonics once single-inventory was adopted.

It is strange that this piece of blinding logic seems to have eluded the record company executives at the time! How did RCA's management imagine that CD-4, which was conceived from the start to produce compatible stereo-quad' product, had a viable business plan?³


But single-inventory didn't just undermine the business-model. It forced technical compromises too. Especially for CD-4.4

For a long period at least, it was obvious that the majority of record buyers would be stereo (or even mono) listeners. The "execs" knew they couldn't disappoint them. Because the CD-4 discs had to stand-up in a market of stereo discs, the baseband modulation would have to be cut more nearly at standard, stereo levels (see waveform).

Single inventory CD-4 records forced the mastering engineer into an impossible choice. Either disappoint the 5% of your prime CD-4 customers with a disc which was difficult to decode, or disappoint the majority of stereo listeners with an album cut at half the volume of your competitors.4..... We have the proof of who won!

Why were Japanese CD-4 discs different?

Did the Japanese record retail industry regard CD-4 discs as separate from stereo inventory? Were they thus allowed to be more conservative in recorded level for the CD-4 product? We have not been able to determine this.

We do know that all Japanese LP pressings (including CD-4) are widely regarded as technically superior by present-day record-collectors. Remember the height of the CD-4 era coïncided with the oil crisis of the early nineteen-seventies. Unaffected by the OPEC embargo which forced American pressing plants to use recycled PVC copolymer, JVC even developed a new, low-noise plastic formulation for their home market (called Super Vinyl) at this time. Perhaps Japanese consumers, blessed with less surface-noise, were more tolerant of discs cut at a lower volume.

We know too that Japanese records are widely admired for their "dynamics". So, pressure on the mastering engineer to obtain a "loud" record was evidently more rare in Japan than in the UK or the USA. We suspect, a cultural respect for engineering detail and standards (often because managers were engineers rather than business people), prevented the sacrificing of technical standards in favour of sales. Any such sacrifice was deleterious to a fragile system like CD-4 and this is the fundamental reason why these Japanese records are better. They demonstrate just what was possible using JVC's CD-4 system.

1. By Jonathan Gatarz, for which, much thanks.

3. And CD-4 wasn't really as compatible as all that. You couldn't record the discs to tape and you couldn't broadcast them. You could do both with QS and SQ.

4. Remember that matrix quadraphonic records could be cut much nearer normal stereo levels.