Early Recordings and how to deal with them

By early recordings, we refer to the records made before 1930. For the most part, these recordings are acoustic recordings. But early electric recordings are covered here too because it offer the opportunity to cover the important step brought about by electrical recording and study the very important paper by Maxfield and Harrison of Bell Laboratories1.

Acoustic recordings refer to the performances on records (or cylinders) captured before the invention of the electric recording in 1926. In these recordings, it was simply the energy in the sound of the musicians themselves, captured via an acoustic horn, which drove the mechanical stylus that engraved the groove in the wax master.

The focus on the energy of the singers and instrumentalists is important here. In order to get enough volume to capture the sound adequately in the wax, the musicians were required to play louder than they would have played at a concert and musical nuance was inevitably limited. Some instruments were even adapted to "cut-through" adequately on the recording. The most charming of these is certainly the Stroh violin a Frankenstein of an instrument, tuned and played like a violin but with a bridge which vibrates a diaphragm attached to a horn!

With instruments such as these and certain musical re-arrangements (with tuba doubling - or sub'ing for the basses) and the musicians huddled close to the enormous recording horn, it is no exaggeration to claim as do the authors of the Bell Laboratories paper on electrical recording,

With such an arrangement of musicians, it is very difficult to arouse the spontaneous enthusiasm which is necessary for the production of really artistic music.2

Fascinatingly, the main argument in favour of electric recording in the Bell paper of 1926 is not the improved quality over acoustic methods per se, but that musicians may be more natural when recording electrically and that the microphones may be more distant from the musicians, so that music may be captured in its natural ambience. Whilst both points are certainly valid, and that the invention of electrical recordings was ultimately a very significant advance, it is true too that, the methods forced upon musicians by acoustic-recording did produce of catalogue of recordings of intimacy and directness unsurpassed by electrical recordings for another 20 years.

A good example of acoustic technique is this recording of the great tenor Carulso, here singing Handel in 1920. This recording was entirely processed with Stereo Lab.

Because a significant proportion of the total number of commercial recordings made in the lifetime of the gramophone (or phonograph) were acoustic. And, because the unique place that these acoustic recordings hold in the history of recorded sound (and also because many of them are really good!), Stereo Lab devotes some features especially to these discs. 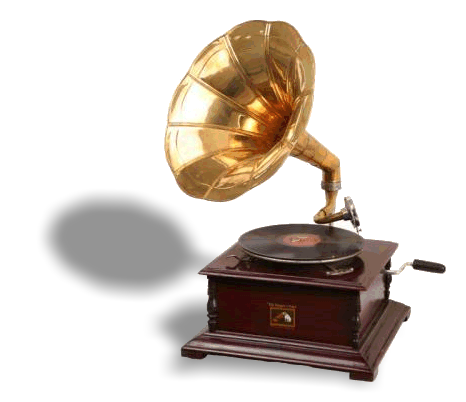 Because of the physics involved, the groove on an acoustic record has a constant-velocity characteristic. This is just as well because the reproducing gramophone, which needs to deliver power into a reactive air-load, needs an input which is inversely proportional to frequency; with big wiggles in the bass and much smaller wiggles for the treble. The overall recording-reproduction system has thereby (to a very rough approximation) a transfer-function of unity.

This transfer-function is preserved too when such a recording is traced by a modern, electromagnetic cartridge because it too is velocity sensitive. From a purely physical point of view therefore, these recordings should be equalised "flat"; that's to say, not equalised at all (EQ-F in Stereo Lab).

However, the bass on these recordings is so limited by the technology*, that a certain degree of bass-boost is often worthwhile and restores a fullness of tone to the tenor and bass voice and the baritone and bass instruments of the orchestral choirs. In jazz recordings, bass-boost helps bring some body to the rhythm-section. The limitation in so doing is more often than not the degree of low-frequency "rumble" on these recordings. Some early recordings are better kept flat to avoid boosting these interference signals, but most benefit.

EQ-G in Stereo Lab which is a general 78 equalisation often works very well because of its limited bass-boost. Always be sure to engage rumble-filtering and Hum removal in the Phono EQ tab of the Preferences dialogues with these recordings. And select Mono in the phonograph regime drop-down for all laterally recorded discs. (See notes on hill-and-dale, vertically cut discs.)

* Note that the boost being applied to these early recordings is compensating for unintentional limitations in the bass-response of the equipment, not to deliberate limitation of the bass-response by electrical means. That would come later as we shall see.

For baby-boomers for whom the world of radio and gramophone records intimately interweaved, it's surprising to learn that the record companies saw radio as a threatening commercial interloper throughout the 1920s, and especially during the depression of the 30s. From the middle-twenties, the new medium took hold in a very big way. Record sales in the USA dropped from a high of 105.6 million records sold in 1921 to 5.5 million in 1933.

Not only was the music free on the radio, but there was no doubt that the sound quality via the microphone and loudspeaker was far superior to the mechanical recording of the gramophone. It was clear that the record companies needed to "up their game" if they were to survive. Electrical recording was their response to this.

A key innovator in the improvement of recorded sound technology was Bell Laboratories which was the research division of the US telephone monopoly, American Telephone & Telegraph (AT&T). Bell Lab's had been working since at least 1914 on technologies for long-distance telephone transmission to span the USA.

The Bell Telephone Lab's paper makes interesting reading, nearly one hundred years later. The scope of the improvements detailed in this paper and the authors' understanding on the basic principles is astonishing. In its detailed description of the both mechanical and electrical technology also gives us clear and exact data points of how to replay these discs today.

A surprise in reading this paper is the assumption by its authors that, whilst the recording equipment would be electrified, the replay equipment would remain acoustic. As the authors put it,

Where the question of reproduction is concerned, the same two alterşnatives mentioned for recording present themselves, namely, direct use of power derived from the record itself versus the use of electromeşchanical equipment with an amplifier. In this case, however, the situaştion is a little different as the power which can be drawn directly from the record is more than sufficient for home use. Since any method of reproducing from mechanical records by electrical means involves the use of a mechanical device for transforming from mechanical to elecştrical power and a second such device for transforming from electrical back to mechanical power, that is, sound, it is necessary to use two mechanical systems, one at each end of an electrical system. Where the power which can be supplied by the record, is sufficient to produce the necessary sound intensity, as in the case of home use, it is in general simpler to design one single mechanical transmission system than it is to add the unnecessary complications of amplifiers, power supply and associated circuits.

It is this pivotal nature of this paper (electric for recording: acoustic for reproduction) which makes it such a useful resource, for it not only describes the electrical equalisation of the recording path, but further contains a very detailed description of the acoustic machine for reproduction. Thus, the reference is not just useful in establishing the correct strategies for replaying electrically recorded discs, but also the acoustically recorded discs which preceded them.

Maxfield and Harrison's paper gives us a clear indication of how these discs were equalised during recording,

In the process which is being described in this paper, these limitations [of excessive groove modulation and excessive stylus acceleration] have been met commercially by having a frequency characteristic of the uniform velocity type between the frequencies of 200 and approximately 4000 cycles per second. Below 200 it has been necessary to operate at approximately constant amplitude with a reşsulting loss in intensity which loss increases as the frequency decreases. Above 4000 it has been necessary to operate at approximately constant acceleration with its consequent slight loss in intensity at the very high overtones. With a characteristic of this type, a range of frequencies from 60 cycles to 6000 can be recorded with reasonable success although the very low and very high range are slightly deficient. With a record having such a frequency characteristic, the inherent limitations are divided between the two ends of the frequency band and where electrical reproduction methods are used, it is possible to employ a reproduction system whose frequency characteristic comşpensates for that of the record.

So, there we have it: When the authors say, Below 200 it has been necessary to operate at approximately constant amplitude with a reşsulting loss in intensity.., they mean a loss of intensity to the listener with an acoustic machine. Where electrical reproduction methods are used a compensating bass-boost should be applied. (Careful study of their rather wobbly graph shows that 250Hz is a better choice of frequency for compensation.)

The comment concerning constant acceleration for frequencies above 4kHz is a little misleading. Really it means the top-response of the recording transfer-function starts to roll-off at about 4kHz. That there is much information above this frequency (other than distortion from lower notes), or that treble-boost equalisation should be employed to recover this constant-acceleration has been disproved in our experiments with these discs.

We recommend processing these discs in Stereo Lab with phono equalisation EQ-G.

Only a few years passed before British Columbia Gramophone in the UK developed their own system to avoid paying royalties to Western Electric after the Wall Street crash.

The principles of the Columbia system were similar to the Westrex system, but the details differed and this included the frequency point(s) at which the groove changed from constant-amplitude to constant-velocity. (The term recording characteristic would be coined for this.) British Columbia Gramophone's own recording characteristic was the first of many such adjustments which would be adopted over the next thirty years.