Before Blumlein developed the crossed, coincident configuration of microphones for stereo recording, he developed a unique microphone configuration of near-spaced omnis separated by a block of wood resembling (to a first approximation) the human head. In other words, he invented a Binaural to Stereo converter.

This arrangement has been called, the greatest forgotten invention in audio engineering.

Despite being almost completely forgotten, the advantages to the recording engineer of this technique are legion. Omnis are usually considered to sound slightly more "open" and "uncoloured" than other microphones. Most agree that the stereo recordings with the best stereo image are derived from crossed cardioids or cosine (figure-of-eight) microphones. But many engineers are prepared to sacrifice stereo image just to be able to use the more natural sounding spaced omni's.

The microphones should be placed 17cm to 22cm apart (not widely spaced as in conventional technique). Various baffles may be inserted between the microphones to good effect too, so this technique suits various binaural and quasi-binaural microphone arrangements like the Jecklin's OSS disc, the Crown SASS-P MKII stereo microphone, Faulkner's Phased-array, and the various spherical microphone baffles and the in-ear microphones available on the market. (In fact Blumlein saw the δ technique as a binaural to loudspeaker-stereo conversion process: which is what it is!). Subsequent recordings may then be treated by Pspatial Audio's Blumlein δ algorithm.

The technique of near spaced microphones may even be extended to use near-spaced cardioids which enables very nice recordings to be made which suppress rear pick-up. In fact, even hyper-cardioids and gun microphones may be employed which permit good, full-width stereo recordings to be made of relatively distant events - something which no other technique can achieve.

This has huge applications to TV, film and live theatre and music!

It can be shown however that phase differences necessary at the ears for low frequency directional sensation are not produced by phase differences at two loudspeakers (both of which communicate with both ears) but are produced by intensity differences at the speakers......... It will be seen therefore that the invention consists broadly in so controlling the intensities of the sound......emitted by a plurality of loudspeakers.

Intriguingly, Blumlein regarded the principle of pan-potted stereo as trivial - it seems, even in 1933, the principle of positioning a pre-recorded single mono sound-signal by means of intensity control was well known.

It must be understood that the controlling of intensities of a plurality of loudspeakers spaced, for example, round a motion picture screen has previously been proposed and no novelty for mere intensity control per se is claimed, except insofar as the nature of the control is such as to provide the necessary phase and intensity difference sensations.

Therefore, the technological problem Blumlein set out to solve was how to "capture" the sound field; so that directional information was encoded solely as intensity difference.

Blumlein noted that a crossed-pair of velocity microphones mounted at 45 degrees to the centre of the stereo image has the technological advantage that a pure intensity-derived stereo signal may be obtained from such a configuration without the use of electrical matrixing. His instinct proved right because this has become one of the standard arrangements for the acquisition of intensity coded stereophony, to such an extent that this configuration has become associated exclusively with his name, often being referred to as, the Blumlein-pair, an eponymous, and somewhat incorrect label! In fact, the greater part of Blumlein's patent is concerned with a primitive "dummy-head" (quasi-binaural) stereophonic microphone arrangement in which,

.....two pressure microphones a1 and a2 [are] mounted on opposite sides of a block of wood or baffle b which serves to provide the high frequency intensity differences at the microphones in the same way as the human head operates upon the ears.

The arrangement is clearly visible in Fig. 1 of the patent.

Blumlein noted that, when listened to with headphones, the direct output from the microphones so arranged produced an excellent stereo effect. But, when replayed through loudspeakers, the stereo effect was very disappointing. The transformation Blumlein required was the translation of low-frequency, inter-microphone phase differences into inter-channel intensity differences. He proposed the following technique:

Blumlein's comments on the perpendicularly of the sum and difference vectors are far from obvious. However, consider this....... 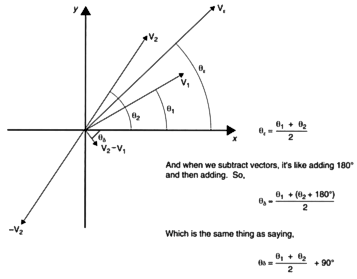 This is the circuit which Blumlein named, the Shuffler (labelled C in his Figure 1 drawing). It is NOT the same as the Stereosonic Shuffler present in the post-war EMI system (that is equivalent to the original FRANCINSTIEN - also included in this software package.)

Blumlein's theory was brought up to date in a proposed microphone technique named TIHM - for Time Intensity Hybrid Microphone (Brice 1997). Below is Brice's modern implementation of Blumlein's work the rationale for which profits from perceptual psychology data which was derived many years after Blumlein's untimely death (see References).

The Blumlein δ algorithm included in this software is an implementation based on Brice's TIHM decoder. The algorithm is illustrated below.

The TIHM algorithm in software