The shuffling technique selected here is an entirely new technique and is intended to compensate for various shortcomings in crossed-cardioid recordings which are usually accused of lacking "spaciousness".

In order to address the limitation noted in relation to crossed, velocity microphones and their characteristic of encoding the entire 360° soundstage, recording engineers have developed versions of the coincident microphone technique using cardioids which, by their nature, reject sound from the rear of the capsules. In usual deployments, the microphones are rigged on sturdy stands about two metres or more above the performance area floor and pointing slightly down. But to what extent is the response pattern of the cardioid microphone suitable for accurate stereo encoding?


The theoretical response of a cardioid microphone

The theoretical response of a cardioid is given by ½ (1 + cos θ) where θ is the angle of incidence of the sound wave. This curve is plotted above, and the curves for two, superimposed cardioid responses at ninety degrees to one another are plotted below.

The curves are translated from polar form to rectangular form below (upper curves).


Pan laws for 90 degree mounted cardioids (lower curves are empirical data for HF response in practical microphones)
This should be compared with the ideal panning laws of the pan-pot and the crossed cosine microphone array, given here: 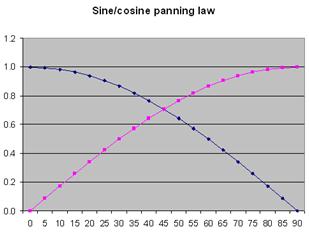 Pan laws for 90 degree mounted cardioids (lower curves are empirical data for HF response in practical microphones)
As can clearly be seen, the crossed-cardioid arrangement will fail to produce adequate levels of inter-channel level difference at θ = ±30° from centre . The inter-channel ratio (upper curves) is a less than 0.7:1 at 30 degrees from the centre; wholly inadequate for proper stereo encoding at low and middle frequencies. In fact, the only reason crossed cardioids give an adequate stereo effect is due to HF beaming effects (shown as the lower, uneven curves in the polar response of the 90° cardioids). This data is empirical and indicates that HF beaming effects create greatly exaggerated inter-channel ratios at high-frequencies. These results were measured from a selection of practical, recording microphones.

One way out of this impasse is to arrange cardioids at an angle greater than 90 degrees with respect to one another, as is illustrated above. This has the advantage that adequate inter-channel ratio is provided, but the microphones are so widely set that the stereo image is badly compressed laterally.

From the above we can conclude that crossed cardioids will provide insufficient level differences to provide correct stereo reproduction over loudspeakers at low and middle frequencies (<1kHz). This fact alone accounts for the lack of "spaciousness" or "low-frequency bloom" so often attributed to this microphone arrangement. It is also incorrect to refer to crossed-cardioids as "Blumlein technique" since he never - and surely never would have - endorsed such an approach.

Another, intuitive way to comprehend why crossed-cardioids are not an accurate way to encode stereo information is to consider each cardioid microphone as a combination of a cosine (eight) and omnidirectional response. (It's entirely justifiable to do this: in fact, the Western Electric 639a, one of the first, practical, cardioid microphones, actually comprised a combination of a velocity and pressure-operated capsules.) Looked at in this way, we can see the crossed cardioid pair is equivalent to a crossed pair of eights in combination with two, coincident omni's: that's to say, a mono microphone! The signals from a crossed-pair of cardioid microphones would be mathematically identical to those produced by a pair of eights mixed 50% with a mono signal as shown here.

The crossed cardioid pair is equivalent to a crossed pair of eights in combination with two, coincident omni's; that's to say, a MONO microphone!

It may seem incredible given this consideration that this technique works at all. In fact, as shown above, the only reason the crossed-cardioid technique gives reasonable results is due to the HF "beaming" which the microphones normally possess which ensures the exaggerated high-frequency channel differences predominate over the mono signal at higher frequencies.

This may seem like a damning indictment of the crossed-cardioid microphone technique. However, it suggests a manner in which the signals might be improved by the addition of a mono, omnidirectional microphone signal fed in anti-phase to the left and right signals; thereby cancelling the unwanted mono component in the cardioid signals. This would work like this,

In words: if an anti-phase, omni response is added (-6dB) to the output from one of the microphones, the resultant is a cosine response of reduced sensitivity.

Whilst it might prove an interesting experiment to attempt to use three microphones in an array of this sort, the practicalities of finding microphones with matching responses would be a real challenge and the possible phase cancellation effects that such a technique might induce could prove problematic. (Nevertheless, there's a fun post-grad' project awaiting someone here!)

Such a process is at the heart of this algorithm which processes the signals from a coincident cardioid stereo pair to tease out the velocity response of the pair from the unwanted, mono, "coincident-omni" response. But there's a complication. This omnidirectional, subtraction process must only happen at low-frequencies. At HF, the microphone beaming effects will provide the differential-intensity stereo information.

This electronic, post-processing approach, although valid in its own right, it is not exactly equivalent to subtracting the signal derived from an omni-directional microphone from the left and right signal to re-create the velocity response, because - due to directionality of the cardioid microphones - we lose the rear-lobes of the cosine response. This could be regarded as a special advantage because the resulting polar pattern looks like half of an eight response. That is the reason, the inventors called this technique, Phædrus Crossed-FoursTM.

The polar response of a pair of crossed-cardioids when treated with the crossed-fours algorithm. The "four" relates to the fact that the virtual microphone has "half the response of an eight"!