Philip Vanderlyn, who worked with Blumlein, writing after his retirement from EMI, referred to experiments made after the publication of the joint Stereosonic paper (Clark et al. 1958) in which demonstrated that it was possible to derive a theoretical law for high-frequency stereo images based on transient sounds. To do this, he described a simple - but remarkable - experiment in which the listener in a standard, anechoic stereo experiment was replaced by two spaced omni-directional microphones, spaced apart by a distance equivalent to the human interaural spacing (approximately 20cm) but with no baffle interposed between them. The unmodified signals from these microphones were then sent - via amplifiers - to headphones, worn by the listener in a different room. In simplistic terms, the microphones thereby "replaced" the listener's ears but not her head! 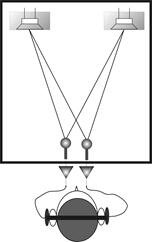 Unremarkably, LF imaging was possible using this set-up and this bore close resemblance to the results obtained by the listener at the same position as the microphones in the anechoic room. Much more surprisingly, it was found that it was possible to pan HF transient sounds (random noise filtered above 2kHz, modulated by a pulse with rapid onset and slow decay), in exactly the same way as low frequency sounds; that's to say, by means of simple amplitude differences between the loudspeakers. Vanderlyn advanced a putative mechanism for this based on the ear and brain system integrating the cues arriving at each ear over a period of time longer than the interaural transit time as shown below. 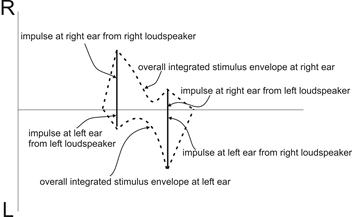 Whatever the mechanism, as Vanderlyn says himself in his 1979 article,

The results ... are sufficiently clear cut to show that an effective interaural time difference cue is produced when loudspeakers are driven with high frequency transient signals, in phase but of different amplitude, without the benefit of head shadowing effects.

Even more amazingly, it was found that the apparent position of HF transient signals panned in this way, correlated perfectly with the law for low frequencies. Vanderlyn next experimented with a set-up in which a dummy head was interposed between the microphones, to mimic (roughly) the HF shadowing effect of the listener's head. The experiment above was repeated and - this time - it demonstrated that the apparent HF image was always further from the median plane for a given inter-channel amplitude ratio: exactly the same effect as noted in the earlier experiments in 1958.

To summarise Vanderlyn's remarkable results, he found that amplitude-difference ("panned") stereo, not only produces reliable and accurate low-frequency time-delay effects at the ears of the listener, but it provides high-frequency transient time-delay cues as well. These latter cues are actually all the brain needs to decode an apparent position which accords perfectly with the law for LF cues (the experiment which mimics the "headless listener" proved this).

Looked at in this way, we can see the stereo Shuffler circuit derived back in 1957 and the FRANCINSTIEN are both head-shadow compensators, introducing a reduction in the difference signal at high-frequencies sufficient to "cancel out" the shadowing effect of the head and its tendency to exaggerate high-frequency, directional cues.