You don't have to read much about tonearms and phonograph cartridges to come across the term effective mass. What does it mean?

This short page is a précis of a longer article written by Shure's erstwhile chief engineer Roger Anderson.¹

Imagine a 1kg weight hanging from a long string. Now move the weight back and forth over a fixed distance (10cm, for instance). For a one-second oscillation, only a mild force is required, but the maximum force required will be in direct proportion to the square of the number of oscillations per second. In other words, 100 oscillations per second will require 10,000 times more force than one oscillation per second.

Consequently, forces which are insignificant at one frequency may well be overwhelming at a higher frequency. The maximum force (F) required to oscillate a mass with simple sinusoidal motion may be calculated from the formula,

The second diagram shows the weight driven through a lever system whose own weight we'll ignore for the moment. At point 1, the mass obviously looks to the driver like 1kg (just as it did in the first diagram). But the situation is more complicated at point 2.

We can analyse the situation point 2 by rearranging formula above in terms of mass (rather than force),

Let us designate conditions at point 1 with the subscript then,

(We don't need a subscript for k and f because they are the same in both equations.)

Consequently driving the mass through a 2:1 lever decreased the effect of the real mass m1 to ¼ of its former value at point 2. The apparent reduction of mass m due to the lever gives us an effective mass when the mass is referred to point 2 via the lever. 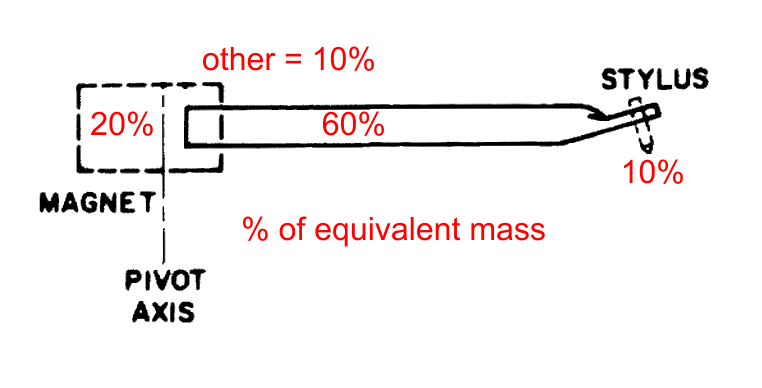 The moving armature of a moving-magnet pickup is illustrated along with the approximate contributions of the relevant parts to the effective mass of the moving system referred to the stylus tip.

Impressions of relative size and weight can be quite misleading. Intuitively, we might expect that the magnet would contribute a large part of the total equivalent mass since it is made of heavy material. But this is not the case because it is so close to the pivot point.

In most practical pickups, the largest single contributor of equivalent mass is the cantilever and this is common regardless of transducer principle of the cartridge (moving-magnet or moving-coil). Here is a link to a page where the role of the cantilever in pickup performance is covered in detail.

Careful choice of materials and form of the cantilever can make a big difference. Stiff, low-density materials like berylium and boron come into their own here. And the tapered cantilever shape offers advantages over a pure cylindrical form because, if the mass of the cantilever can be minimised towards the stylus, performance will be optimised. A hollow pipe rather than a solid structure lowers effective mass too, compared with a solid rod.

It is interesting to note that the diamond tip contributes only 10 per cent or less of the total effective mass. So extravagant claims about nude styli in which the diamond stylus is bonded directly to the cantilever without the intervening metal shank, should be treated with caution; especially as the density of diamond is some 30% higher than aluminium.