Since velocity of the recorded groove is the quantity we record when we make a needle-drop (because phono cartridges are velocity sensitive devices¹), it is useful to know maximum recorded velocities inscribed a gramophone record because, with this information, we may correctly calibrate preamplifier gain so as to take best advantage of the digital medium.

There are theoretical limitations in cutting an acetate (or a metal-master) which would appear enforce a ceiling on recorded velocity. However, empirical studies² show that to this theoretical purity we need to add some real-world data.

Theoretically, there is a very simple rule. The maximum (peak) recorded velocity cannot exceed the linear, tangential groove velocity. For, if it does, the recording chisel "slews" so quickly (beyond 45°) that the chamfer on its rear edge interferes with the recorded groove.

This simple maxim is somewhat complicated in that the tangential groove-velocity changes throughout the entire volute groove. Nevertheless, we can define the limits with precision. At the outer edge of an LP record, the linear velocity is 0.509m/s (20 inches per second), and this reduces to 0.196m/s (8 inches per second) on the innermost. Thus we can say, the maximum recorded velocity on a 33⅓ RPM LP will never exceed 50cm/s, and even this figure is only achievable on the outermost groove.

This is confirmed by our own measurements of LP records and a comprehensive study by Shure Brothers Inc.² which do indeed reveal that no intended modulation ever seems to exceed 50cm/s. Groove damage can produce signals above this level, but these are pathological.

*We suspect the reason for this is that the cutting-engineer is working with a single track and has no scope gradually to reduce recorded-level throughout the duration of the side which is a standard trick with LPs. She is therefore constrained to work within the inner groove velocity-limit; which is 27cm/s on a 45 RPM 12" single.

The graph below relates maximum groove amplitude to recorded velocity for LPs. The standardised dimensions of an LP constrain the maximum possible groove "wiggle" to a peak amplitude (a) of 38μm (0.0015")*.

Velocity V(t) is a function of frequency f and is calculated as, 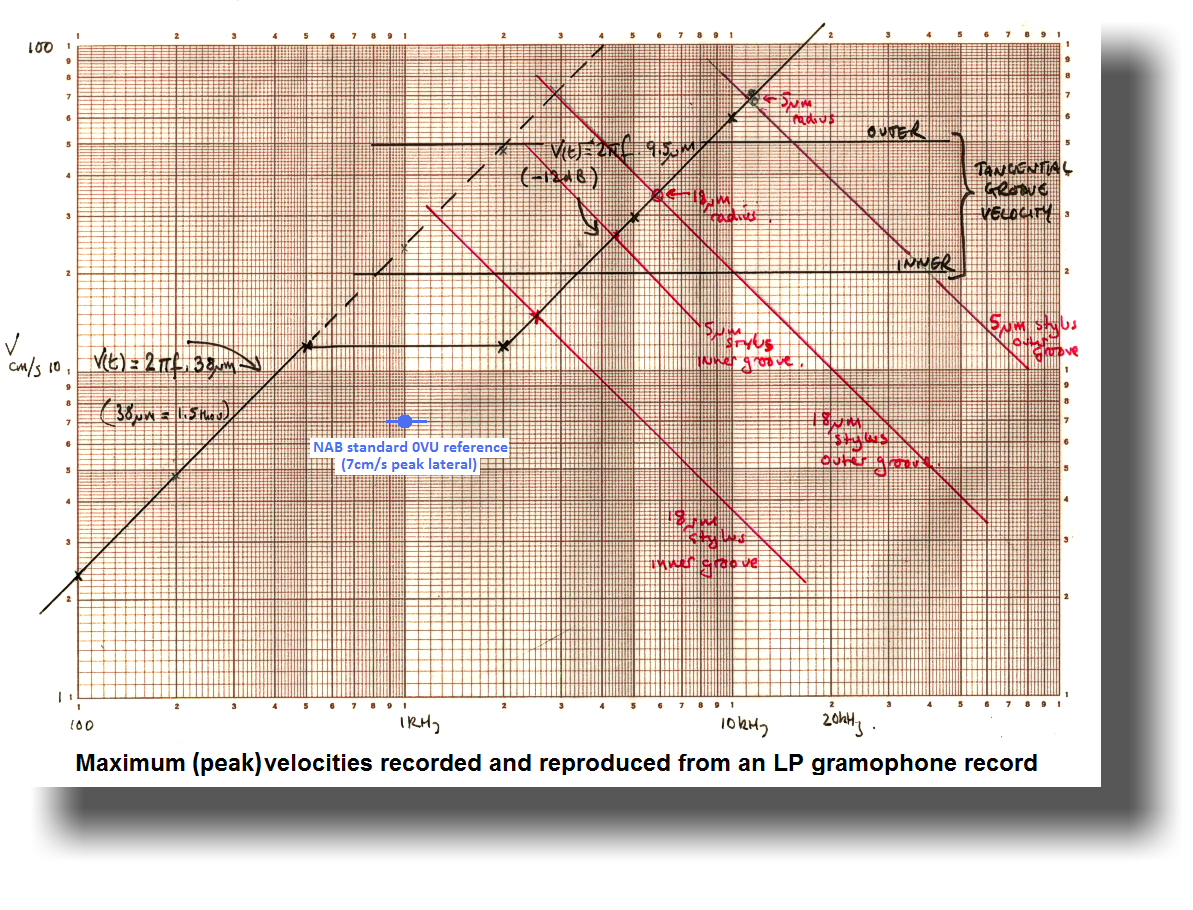 If LP discs were recorded with a true constant-amplitude characteristic so that this degree of "wiggle" was maintained throughout the audio spectrum, the velocities would exceed the 50cm/s limit too early in the audio range for the medium to be viable (see the dotted section the velocity curve).

Instead, an LP recorded with a RIAA characteristic, has two regions of constant-amplitude separated by 12dB and with a falling shelf between 500Hz and 2kHz (see graph below). Maximum excursions above 2kHz are therefore limited to ¼ of the maximum peak excursion at low-frequencies, or 9.5μm (pk). This modification keeps maximum velocity below the tangential groove-speed limit until 8kHz at the edge of the disc and 3.5kHz at the end of the playing-side.

These may seem quite low frequencies and indeed they are! Phonograph records are only viable because the energy of music falls with frequency, so the medium isn't required to be able to handle full-scale modulation at all frequencies. Today we would consider the phonograph a compressed medium.

Data collected from the measurement of real records² is presented below (with a few changes to improve the y-axis scale).

The data confirm maximum velocity almost never exceeds 50cm/s, and that these maximum values do appear around 8kHz just as the theory predicts. However, the real-world velocities experienced in the mid-range (around 1kHz) exceed the theoretical expectations which predict a limit of around 12cm/s by a substantial margin. Shure measured 30cm/s velocities in this region. This is evidence that commercial records are sometimes over-cut to maximise volume.

In fact, the situation is actually worse than the considerations above imply when we come to play the record, because a further limitation exists on reproduced velocity when the stylus radius dimension exceeds the radius of the recorded curve3.

Determining the miminum radius of any section of smooth curve at point (P) is part of differential geometry. The solution is known as the osculating circle (or kissing circle) which is the circle that best approximates the curvature (C) at P, as shown right.

We can calculate the minimum radius of (Rc) of a recorded groove4 using the formula,

where v is tangential velocity, a is peak amplitude and f is frequency.

The results of these considerations are annotated on the main graph too (in red lines). These indicate that a "standard" 18μm (0.0007") radius stylus will fail to transduce the recorded values on the disc at all diameters of the disc surface. However, a stylus with an effective radius of 5μm (as do the best hyper-ellipticals etc.), will keep ahead of the limitations due to cutting at all recorded radii.

It would appear that no better argument could be advanced for the superiority of hyper-elliptical stylus and its cousins such as the Shibata. Although, it should be bourne in mind that a cartridge fitted with a stylus of this type has the capacity to produce peak electrical levels over twice that of the conical type for the same nominal sensitivity, so there are implications for the playback electronics. Furthermore, the the elastomer bearing which supports the stylus and cantilever of the cartridge needs to have been correctly designed to cope the extra deflection which the finer stylus profile affords at high-frequencies. If it hasn't, the result is better HF response at the cost of worse tracking.

1. Even a crystal (ceramic) cartridge outputs a measure of the groove velocity if it is appropriately loaded as explained here.

4. The reciprocal of this value is called maximum curvature: a big number expressing a small radius.

Standardised dimensions of a groove (and land) of a 33⅓ RPM LP.