Polyvinyl chloride (PVC) and other stuff...
What are records made of?

The bulk of the material used for post shellac-era records is a vinyl chloride-acetate copolymer. More than 80% of the material is the plastic polyvinyl chloride (PVC), the remainder of the bulk (the acetate polymer) being present to lower the processing temperature during the pressing of the record.

To the copolymer are added small quantities of carbon black pigment, stabilizers, and lubricants, the latter to assist removal from the mould.

In the case of cheaper records, cellulosic or non cellulosic fillers or extenders were used to reduce the amount of plastic in the bulk of the material; these materials are various and relatively little known. Modern record manufacturers now eschew the use of fillers as most increase noise on playback.

Several 19th and 20th chemists succeeded in producing the plastic polyvinyl chloride (PVC) but production on an industrial scale didn't commence until the 1920s in the USA. Even then, use of the new material languished until the Second World War accelerated demand for a synthetic replacement to costly natural rubber; especially to replace the the insulating material for wiring on military ships.

Today, PVC is the third largest-selling commodity plastic in the world after polyethylene and polypropylene. PVC's low cost, excellent durability and processability, make it the material of choice for dozens of industries including, of course, the manufacture of vinyl gramophone (phonograph) records.

PVC (C2H3Cl) has an amorphous structure with polar chlorine atoms in the molecular structure. In this, PVC is different from other plastics which have only carbon and hydrogen atoms in their molecular structure (like Polyethylene). PVC, having the molecular structure where the chlorine atom is bound to every other carbon chain, is highly resistant to oxidative reactions. Other general purpose plastics with structures made up only of carbon and hydrogen are more susceptible to deterioration by oxidation. The basic unit of the polymer molecule is shown in the diagram. The number of these units in a typical molecule is 1000 to 2000 ( = n, the degree of polymerisation). The long-chain PVC molecles are randomly oriented and are curled and intangled together to form the plastic as shown in the next picture. 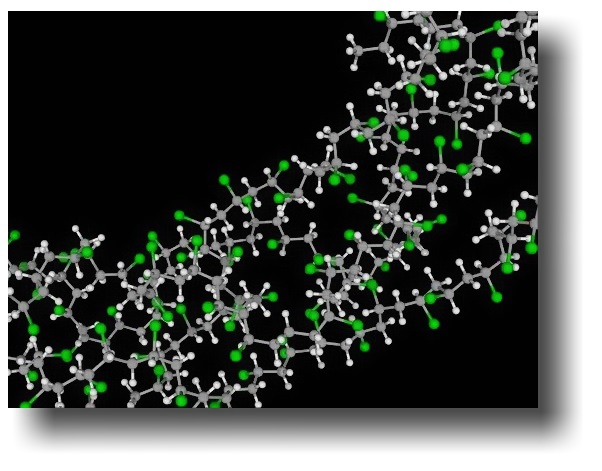 When vinyl is mentioned, most people think of shower-curtains and car seat-covers. But these are highly plasticised vinyl resins containing anywhere from 20% to 40% of a liquid plasticiser.

Pure PVC is an amorphous, mechanically stable material which is basically rigid and transparent at normal temperature. The rigidity of pure PVC is due to the short distances between the molecules and the strong intermolecular forces between them. When heated, the energies of molecular motions become greater than the intermolecular forces which results in the softening of the resin. If plasticisers are added to PVC when molten, the plasticiser molecules make their way between the PVC molecules and prevent the PVC polymer molecules from coming closer with each other. If enough plasticiser is added, the polymer molecules are kept apart even at normal temperature and softness is maintained.

PVC is a thermoplastic material which means it may be softened by the application of heat. While hot, it may be formed into any desired shape and then cooled to a solid state. Usually this cycle of heating, forming, and cooling may be repeated as often as desired.

The processability of a thermoplastic material depends largely on its melt viscosity. PVC has a relatively low softening temperature compared with other plastics (92°C compared with 152°C for polypropylene) but it is not suitable for injection moulding because its melt viscosity is comparatively high. (That's to say, it's "gooey".) 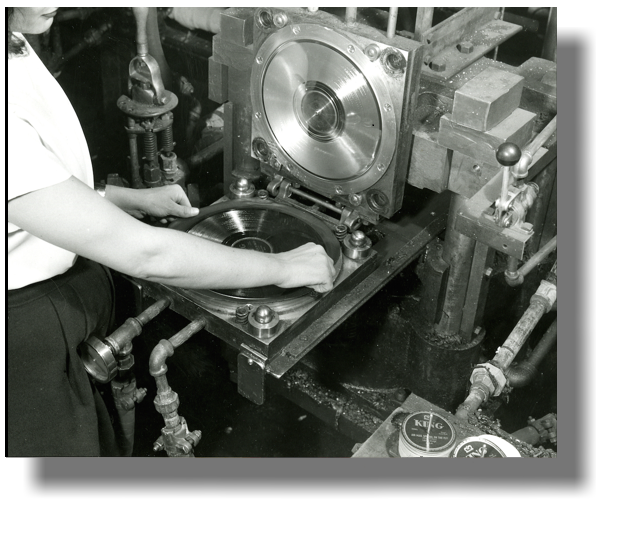 On the other hand, since PVC is an amorphous plastic with no phase transition, PVC products may be moulded with a high dimensional accuracy which they retain when cold. PVC is therefore ideally suited to the dimensionally accurate compression moulding process of making records.

When plastic Long Playing (LP) records were introduced in 1948, the material for the new records was required to be formed in machines intended for the older shellac types. Pure PVC was too viscous for these original machines to deliver acceptable results, so a method was sought to improve the processability of the material. This was accomplished by the copolymerisation of the PVC with polyvinyl acetate (PVA). Polyvinyl acetate is known to most of us as an emulsion in water where it is familiar as a whitish-yellow wood glue (PVA Glue).

To the copolymer, which accounts for 97 to 98% of the material in an LP record, the following are added in small amounts but have a disproportionate effect on the outcome of the product.

PVC degrades chemically when it is exposed to heat. The process begins with the liberation of hydrogen chloride gas at locations in the PVC molecules where they depart from the theoretical molecular structure. This stripping of HCl allows adjacent molecules to fuse (form valence bonds) and this results in the embrittlement of the plastic. In addition, the gas (HCl molecules) can form bubbles in the surface of the material in its molten state.

Manufacturing a record clearly subjects the polymer to substantial heat and this process of degradation happens immediately the plastic is heated for moulding. The resulting production of hydrogen chloride gas is especially inconvenient as it is a catalyst for further dehydrochlorination within the plastic, and it combines with humidity in the mould to create hydrocholric acid which stains and etches the stampers. The hydrogen chloride gas must thus be scavenged and that is the role of the stabiliser.

Ambient (room) heat exists throughout the life of a disc and degradation would haunt records as they gradually became more brittle as the valence bonds form between the long molecules of the polymer. Happily, sufficient effective stabilizer remains in a plastic disc to protect it for a very long time after moulding.

Sometimes products based on vegtable oils have been used as plasticisers in the production of records in very small quantities (≈1% by volume). Plasticisers reduce the internal friction of the mixture, lowering melt viscosity and improving the moulding.

Carbon black is a material produced by the incomplete combustion of heavy petroleum products. A sooty black colour, it is widely used in industry as a colouring agent; particularly in rubber products such as car types. It is added to the mix for for disc plastics in tiny quantities (≈ 0.2% by volume) to give records their characteristic black sheen. The carbon-black used for records must be very finely sieved so that the grains only have dimensions of ≈20nm, otherwise the carbon adds to the surface noise.

A fashionable "secret ingredient" in forum discussions, and a source of worry that cleaning will remove it, lubricants are added to the melt to make records to provide good release from the stamper. When the record is removed from the press without the lubricating effect of the lubricant in the compound, the grooves of the record are sometimes fractured, torn, and deformed by the removal. Often a form of wax, the lubricant too is added in volumes which are fractions of a percent by weight of the overall mix. Too much mould-release agent, far from lubricating the stylus within the groove, results in a non-uniformity to the surface which increases surface-noise on playback.

Untreated plastics used for the manufacture of records possess a very high surface resistivity; as high as 1 × 1013 Ω. They thus may be given elevated static charges by simple handing (withdrawing the record from its sleeve is particularly effective). These charges attract lint, dust and other particles which cause damage as the stylus rides over them. The act of moulding the records imparts a powerful charge too as the disc is separated from the stamper.

Chemicals are therefore added which improve the electrical conductivity of the plastic disc, thereby reducing static charge build-up as the record is manufactured and subsequently handled and played. It might be supposed that carbon black would fulfil this function, but - if sufficient is added to reduce the bulk resistivity of the plastic - it causes a steady hiss on playback.

Assembling the ingredients for the production of the plastic for gramophone (phonograph) discs is not a matter of simply combining the various substances. Instead they must be mixed so that a very complete blend of the various constituents is obtained. Mixing is done at controlled speeds and temperatures and the order in which the various components of the mix are added is carefully controlled. This mixing process is so important that it is given a special name in plastics manufacture where it is called compounding.

With the revival in the fortunes of vinyl records, there's some renewed interest in the selection of materials. One idea is to use thermosetting polyimides; materials which are used for space-suits and for high-performance electrical insulation. Although expensive, polymides possess better thermal stability than PVC and have excellent mechanical properties which could reproduce the groove better and offer a more frictionless surface.

The idea of using thermosetting resins for records is not new. But thermosetting resins (as opposed to thermoplastic resins) are characterised by the property of undergoing a permanent physical and chemical change during the molding operation. In the past, the record industry was built upon the policy of regrinding and reusing reject records; even records returned from dealers and distributors. So that, in the heyday of LP records (especially in America), as much as 20% to 30% of the material used in record manufacture was derived from re-cycling. The reuse of thermosetting materials in this way is not possible and this prevented thermosetting materials being developed for use by the record industry.

When you stop to think about it, the long-playing (LP) record was one of the first plastic artefacts that made an impact on peoples' lives. A car manufactured in 1948 (the same year as the LP was introduced) remains the province of pressed and cast metal, of leather and rubber and cotton. True, the dashboard may have been a Bakelite and the top of the distributor, but there was precious little of the materials which were to transform the lives of so many within 20 years.

Granted, the revival of the fortunes of the LP has something to do with nostalgia and charm. But few like records because of the pops and clicks and wear. Given that there has been 80 years of development in plastics since its introduction of the LP it seems impossible that modern plastics technology could offer substantive improvements to the medium.