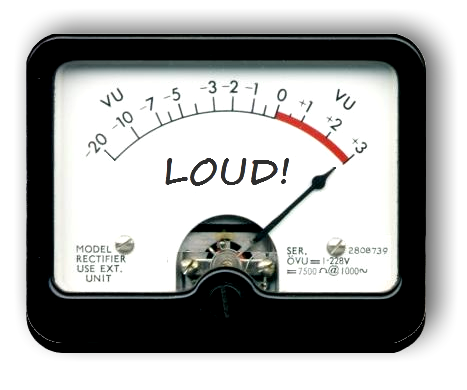 Audio engineers over the last few years have been becoming more concerned with a method of measuring the loudness of audio programme. This interest has been provoked largely by the "Loudness Wars" in which more and more sophisticated dynamic-range compression equipment is being applied to audio material in mastering in order for each new record to sound "louder" than its predecessors.

Click for a short video about loudness measurement and control in Stereo Lab.

Apart from the questionable musical taste of limiting the dynamic range of material in this way, this practice means that music collections have modern material which sounds louder than that recorded 25 years ago, and an evening's music listening (especially if you have catholic taste) becomes an uncomfortable experience as one track "blasts" above the previous one, because it is too loud: or disappears because it is too soft.

Because one clear application of Stereo Lab is in the hands of the curator of a music collection or archive, the software contains the signal measurement thereby to assist in normalising audio tracks to a comfortable and well engineered level; so that music collections or archives may be compiled with similar loudness. Stereo Lab fully implements Loudness measurement to ITU BS.1770-3 as this is currently the best and most widely accepted method of loudness measurement. See here for our recommendation of target levels.

What is loudness? Loudness is not the physical magnitude or intensity of a sound: loudness is subjective. It is the perceived magnitude of a sound which is its loudness. Psychologists have determined that the perception of loudness depends on intensity, frequency and duration.

These three effects (intensity, frequency and integration-time) are incorporated into the design of sound-level meters which are designed to measure something which resembles the human perception of loudness. However, when assessing the effects of discontinuous sound (like music), normal sound measurements like those using a standard sound level meter are pretty useless, because the problem becomes WHEN to measure. Do you measure the peaks, or the quiet moments? The answer is to measure both. In fact, a series of noise measurements is made throughout the duration of the track and an average figure derived.

Audio engineers looking for a method of measuring loudness of audio programme have followed work originally developed for discontinuous noise level measurements known as Leq which is derived mathematically from standard sound level measurements which are taken over a specified period of time at equal intervals.

Leq is the methodology employed in Stereo Lab to derive an average loudness per track. In fact, the precise figure displayed is Leq(0dBFS); the Leq measurement in decibels relative to 0dBFS (the highest valve in digital audio coding). This figure is displayed in the main interface table along with two further figures: Crest factor for the left channel; and Crest factor for the right channel.

All audio metrics may be copied to the clipboard and used in other applications (for example a media-management or database application). This is accomplished by right-clicking the audio file in the main interface.

The Crest factor of a waveform displayed here is the ratio of peak amplitude to Leq(0dBFS). You will find that these vary greatly depending on the type of music. Symphonic, orchestral music can have a crest-factor of 17dB, whereas hip-hop music has been shown to have a crest factor of only 8dB; see below. 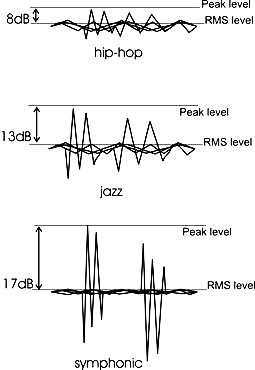 Here are some statistical values for crest factor for different types of music:


It's interesting to note a reduction of Crest factor over time, with classical music having a peak to RMS ration some 6dB greater than "pop", and 9dB greater than hip-hop. As stated earlier, this has less to do with musical genre than to do with the insidious use of greater and greater levels of electronic compression which is applied to modern music to ensure a "loud" record and conspicuous radio-play.

ITU BS.1770-3 standardises an improved algorithm for deriving the loudness and peak measurements based on work by Communications Research Centre (a federal research institute in Ottawa, Canada), McGill University in Montreal and commercial manufacturers in the broadcast television equipment industry. Important broadcast standards concerning the regulation of broadcast audio loudness are based on ITU BS.1770. These include: ATSC A/85 (the US); EBU R128 (Europe); OP-59 (Australia); and TR-B32 (Japan).

The measurement techniques enshrined in BS.1770-3 complement the calculation of Leq by weighting the audio measurement with filters developed by the Communications Research Centre who performed extensive subjective testing to validate the weightings against subjective impressions of loudness. These filters allow for the falling perception of loudness at low frequencies and the effect of the head-shape on sound waves and are combined in a composite filter called a K-weighting filter. Stereo Lab fully implements loudness measurement to ITU BS.1770-3 at all sampling rates.

When measuring loudness according to the methods specified in ITU BS.1770-3, loudness is indicated by the term LKFS (Loudness K-weighted Full Scale). In adopting this international standard, various national bodies have chosen alternative terms. The ATSC A/85 (American) standard operates with the LKFS term. But other organizations (notably The European Broadcast Union or EBU), has adopted the term LUFS (Loudness Units Full Scale). Because of our European provenance, LUFS is the nomenclature adopted in Stereo Lab. However, despite the different names, LFKS and LUFS are identical. They are simply different acronyms for the same measurement!

LKFS/LUFS values are Leq measurements relative to Full-Scale and thereby represent a single value for overall loudness for a file processed by Stereo Lab. The app also optionally allows the user to normalise loudness to a target loudness value. This functionality is useful for a broadcast organisation as it ingests material. But it has uses for the amateur; as a way of building a music collection which is not plagued by harsh volume differences between different audio files.

Target loudness is adjustable in the Settings dialogues. See below for advice on Target Loudness

......the Programme Loudness Level shall be normalised to a Target Level of -23.0 LUFS.

This is appropriate for long-form, dramatic broadcast applications. But most music lovers will find tracks with a loudness of -23LUFS very quiet. Moreover in a 16 bit environment (which, outside the studio, remains the de-facto standard for music delivery) -23LUFS is inappropriate as you are, in effect, sacrificing two bits of dynamic range on the majority of material.

Apple Sound Check (in iTunes) and their new Apple Radio apps, normalise loudness to -16.5LUFS which is a better choice for music applications. It means that an average, well recorded track will have amplitude peaks to about -3dBFS, which is perfect.

Stereo Lab allows the target loudness to be set via a slider with a 10dB range from -24LUFS to -14LUFS which should cover all applications.

Loudness Range describes the overall program material range: From the softest part to the loudest part. The range is quantified in Loudness Units (LU) in dB. To avoid extreme events from affecting the overall result, the top 5% and the lowest 10% of the total loudness range is being excluded from the LRA measurement. Loudness Range is inserted in the relevant metadata fields of Broadcast Wave file format files and is available when right clicking with the mouse on a file from the main interface window.

Because of various issues relating to sampling and reconstruction, a digital peak value (derived from the sample-value itself) is NOT always representative of the peak value of audio once it is converted back to the analogue domain. It is therefore possible to under-read true peak values. To account for this, BS.1770-3 also specifies a method of deriving a peak-measurement which was originally specified in specified by AES SC-02-01. In this process, the audio is over-sampled and reconstructed in a digital sin x / x filter and peak measurements made of the resulting audio. Peak values derived in this manner are representative of the value of the audio peak following reconstruction into the analogue domain. Surprisingly, true-peak values can actually be positive with respect to full scale, for example +2.6dBFS. Stereo Lab also fully implements true-peak measurements at all sample rates.

Stereo Lab uses Principal Component Analysis (PCA) techniques to adjust the parameters applied to the stereo to 5.1 upconversion process. The Channel Correlation Coefficient is derived in this process and is copy-able to the clipboard as explained above.

A complete list of the audio metrics automatically harvested for each source and destination file is given below.