I'm a classical music lover/ recordist and classical recordings are made with stereo microphone arrays. How does FRANCINSTIEN processing affect these recordings?

FRANCINSTIEN is still relevant. But it is true that the situation with recordings made with stereo microphones is more complicated.

Essentially, there are two schools of thought regarding stereo recordings of soloists, orchestras, ensembles and choirs.

The first school, which you might call the British school, dates back to Blumlein and uses two microphones very close together. The technique employs the directional pattern of the microphones to capture and re-create the stereo image by means of amplitude differences between the channels. In other words this method of stereo microphone recording is theoretically identical to that of pan-potted stereo.

These, so called coincident-pair recordings benefit from FRANCINSTIEN processing because the circuit is still addressing a fundamental problem with the recreation of the stereo image. We recommend FRANCINSTIEN T-Sym as this is the latest, most sophisticated processing algorithm for stereo image correction.

The second school of stereo microphone technique uses variations on two or more microphones set apart (usually by a metre or so), and originates from American work for stereo sound for the cinema. Many beautiful recordings have been made using spaced - microphone technique; however the notion behind these techniques is empirical and appears to work by the gradual onset of something psychologists refer to as the precedence effect . These methods all create a stereo effect by means of the time differences of the sounds emitted from the two loudspeakers. It is difficult fully to integrate FRANCINSTIEN into accounts of these techniques because no systematic theory has ever been derived for them in the first place. So we are forced back to simple listening and here our findings are anecdotal.

Ironically, some of the most startling improvements that we have ever heard using FRANCINSTIEN have been recordings made with spaced - microphone techniques. One possible reason for this is to remember that, in a real recording session, although the majority of the signal may come from a spaced - pair of microphones, other "spot" microphones are employed so as to clarify or accentuate certain instruments. These are often employed on rather quiet instruments such as the harp , which would otherwise tend to get lost in the signal from the main pair. Spot microphones are usually deployed on the timpani, which otherwise sound a bit "boomy" and the horns, which otherwise sound weak. And, of course, spot microphones are always employed for vocal or instrumental soloists. These spot microphones are always panned into the appropriate place in the stereo image with pan-pots on the studio mixer. So the FRANCINSTIEN will certainly have a positive effect on these elements of the mix. Once again, we recommend......... 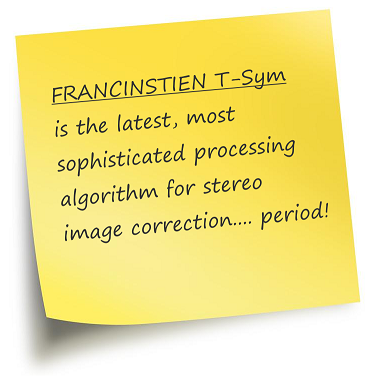