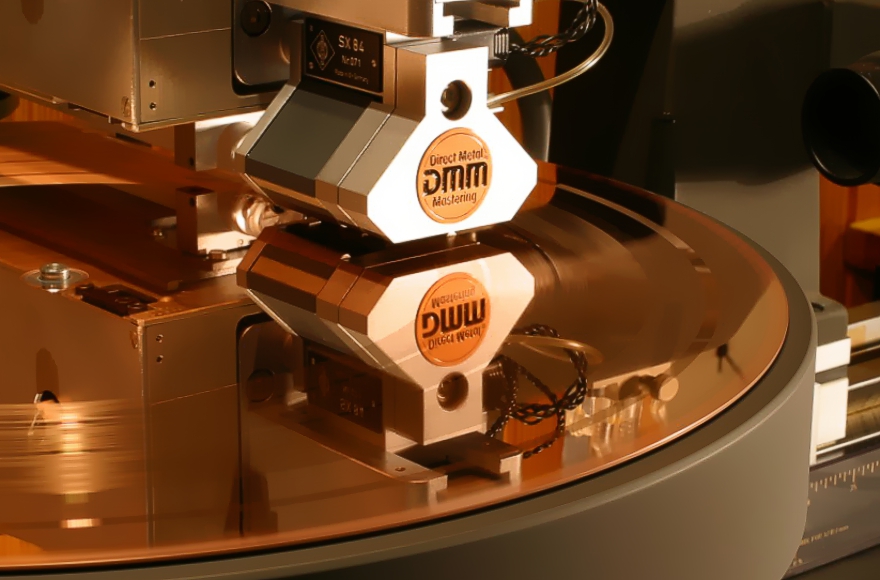 Direct Metal Mastering (DMM) is a record mastering technique which arose in the last days of the record as a mass entertainment medium, in anticipation that blank lacquers would become unavailable.

Blanks were made by very few factories and the predicition was that, when demand fell low enough, they would become unprofitable and cease manufacture.

DMM was the last joint development by the thirty-year partnership of TELDEC and Neumann who had brought so much to the development of high quality records. As with previous TELDEC/Neumann ventures, Neumann manufactured DMM technology under licence.

DMM sidestepped the anticipated supply issues with blank lacquers by recording directly onto a stainless steel disc with a thin covering of copper. These metal masters did not require specialist manufacture and could be made as a sideline by any good galvanic factory.³ Just as nitro-cellulose lacquer had replaced wax as the medium inscribed by the recording stylus. In DMM, the stylus cut directly into the copper layer.

Metal mastering had been discovered in the development of the record as a medium for television pictures - a widely pursued goal at the time and one which had its roots in the earliest days of electrical disc recording (see panel).

It had been known for many years that record lacquers "relax" so that high-frequencies dull if the lacquer is not processed quickly in the factory.

During the development of their Television Electronic Disc (TeD), TELDEC and Telefunken had discovered that much greater bandwidth required for video signals disqualified lacquer as a mastering medium for video discs. Harder, copper masters did not display the same tendency to self-erase high-frequencies. When the TeD product failed in the marketplace, DMM applied the metal mastering techniques of TeD retroactively to audio records.

The advantage of DMM for audio records is the simplification it affords in manufacturing. The cut copper master may be nickel-coated and become the manufacturing mother from which the stampers can be made directly. This cuts out the lacquer silvering and two stages of electroforming in the factory and their potential to add noise and pre-echo.6

DMM in audio mastering, like any new technique, ushered in a few problems, some of which were only resolved at the very end of the vinyl era. This accounts for the rather mixed opinions concerning DMM records.

Amongst the teething problems was a modulation dependent drag due to the increased friction of the stylus cutting into metal. This caused speed variations due to the insufficient torque of the old, Lyrec drive motors which needed to be replaced by more powerful DC motors made by Technics.³

Deprived of the springback effects of lacquer masters, DMM records were physically recorded with a 0° vertical modulation angle (VMA) and were thus badly matched to playback styli with a 15° to 20° VTA. Neumann resolved these with the introduction of the SX84 cutter-head and associated electronics.

Microscopic evaluation of DMM records reveals that the audio modulation at the time of cutting was accompanied by supersonic signal at 60kHz — rather like a CD-4 disc. You will see different opinions regarding the reason for this high-frequency "cutter-bias" signal. Some authors say this signal was deliberately superimposed on the audio signal to aid the cutting of DMM masters.4 Others say³ this is a myth and that, ❝

....the phenomenon was a form of frictional squeaking that was just a side effect without any purpose.❞ 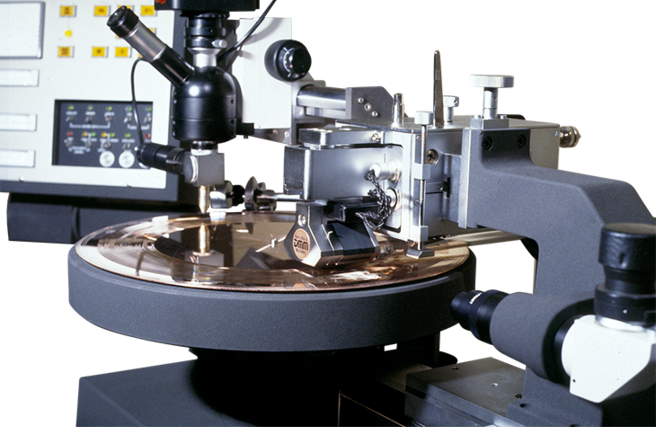 Both are true. The TELDEC patent for DMM5 is clear that the high-frequency (HF) signal is indeed an aid with cutting by reducing the drag on the diamond cutter stylus. Moreover, to be most effective the level of the HF signal should vary according to groove depth: slight in a shallow groove and greater in a deep one.

The signal may be generated and controlled electrically and added to the audio signal prior to the cutter. Or it may be generated by the physical oscillation of the mass and compliance of the stylus driven by the energy due to the friction with the copper blank - in other words, a ❝frictional squeak...❞

Neumann chose the latter solution for their DMM (and last) lathe, the VMS 82 (above). Craftily, the mechanical generation of the "squeak" has the natural virtue of changing according to groove depth in the required way; deep grooves generating more squeak than shallow ones.

The end of an era

Had the anticipated demise of the blank lacquer turned out to be well founded, DMM would have become the default way to make phonograph records. But, in the event, it wasn't just blank lacquers that went extinct .... records went with them. Neumann only made a few DMM equipped lathes and they were the last lathes they ever made.

Of the remaining VMS 82 DMM lathes, most were converted back to normal lacquer operation. Today, only a handful of studios are still able to offer metal mastering.

Video from a record

As far back as 1927 the Scottish inventor John Logie Baird engraved video signals on a 78 RPM wax disc by means of a record cutting lathe and reproduced them on a record player.¹ The amplitude modulated signal was fed to a Baird television reproducer.

The rather haunting results of Baird's process (“Miss Pounsford” recorded on the 28th March 1928) is illustrated as a looping gif file above. This reproduction was engineered by mechanical TV enthusiast Donald McLean².

The resolution of Baird's picture was very limited. Horizontal resolution was 30 lines (the system scanned vertically). With a bandwidth of about 5kHz and a frame rate of 12½ frames per second, the vertical resolution was limited to about (2 × 5000/375) = 27 pixels per line.

Baird called his system Phonovision. He hoped to sell the entire reproducer with pre-recorded software (gramophone records). He considered the experiments to have been a failure at the time and Baird moved onto other things.

Nevertheless Baird had managed to record, store and playback video signals. And the gramophone (phonograph) record had become the first video storage medium.

The image loop (right - once again reconstructed by Don McLean)² is from audio-bandwidth disc recordings made of BBC off-air transmissions of the 30-line Baird system.

The recordings are thought to have been made by a Marcus Games of London in the 1930s. The quality - probably of the original pictures themselves - has considerably evolved from Baird's experiments in the 1920s.

Baird's original idea was forceful enough to provoke a century of experiments to record video signals onto a mass-produceable discs culminating in the well known DVD.

But TeD (Television Electronic Disc) was not optical like the DVD, it recorded television signals in a groove which was physically scanned by a stylus. TeD was first announced in 1970 and went on sale in 1975. It was developed by a team from two German companies: AEG-Telefunken and Teldec.

TeD records employed a vertical (hill and dale) recording method with an amazingly reduced track pitch of 130–150 lines/mm compared with the typical 300 LPI (12 lines per mm) on an audio disc. The groove was read by a piezo-electric pickup.

Metal mastering into a copper master was required to capture this degree of storage density. Coupled with a rotation speed of 1,500 RPM or 25 revolutions a second (so one revolution recorded an individual video frame) a retrieval bandwidth of about 3MHz was possible — enough to capture a PAL television picture. 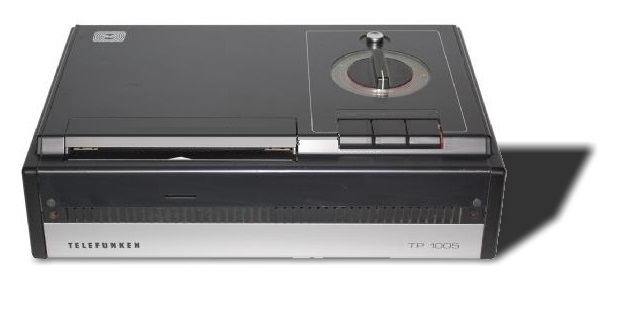 A TeD player by Telefunken 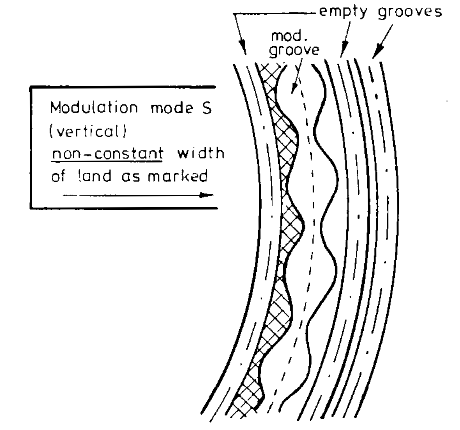 Pre-echo arises because acoustic events, which occur one after another in time, are placed side by side on the the surface of a record.

The most common manifestation of pre-echo this is the "premonition" of a loud event which is weakly heard in the a quiet section of record one revolution (1.8 seconds) prior to the heavily modulated groove.

Pre-choes are rightly considered as serious artistic flaws in record production as they interrupt the listener's attention to exciting or dramatic programme material.

The illustration6 (right) illustrates how pre-echoes are formed and is from a very thorough study of disc echo phenomena was made by Otfreid Stephani of the Deutsche Grammophon factory in Hannover (PolyGram by 1982)6. The mechanism of disc-echo is mechanical. As the groove is modulated it displaces the land (the material between the turns of the groove), so that the imprint of the modulation is spread-out across the disc to adjacent spirals of the groove.

The illustration indicates that there must always post-echoes too. This is indeed the case. But post-echoes are often masked or moderated by the natural reverberation characteristic of the programme. Psychologically, humans are less bothered by post-echoes. 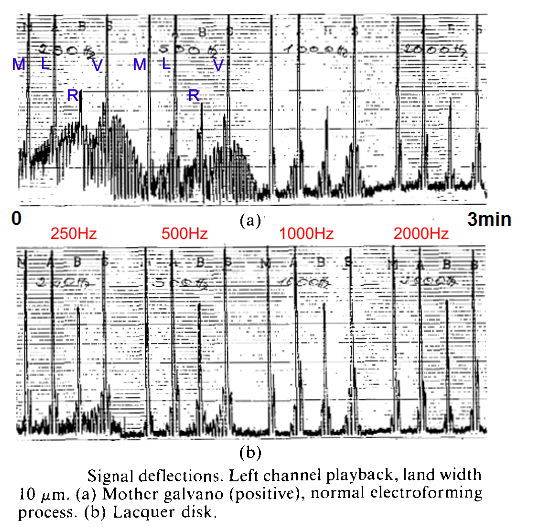 Stephani's test signals consisted of 1 second tones recorded at standard recording level: laterally (mono); left-channel only; right-channel only; and vertically — each separated by about 10 seconds silence. This test was made with tones at 200Hz, 500Hz, 1kHz and 2kHz. The entire test sequence lasted about 3 minutes. The sequence was recorded several times across the entire side of an LP disc at different groove pitches or spacings.

Stephani analysed the recording made of this test sequence after lacquer cutting and after the processing to produce the metal mother. The results were recorded with a motor driven pen-recorder (as shown left). The peaks are the deflections caused by the test signals: the "clutter" around the peaks are echoes.

He demonstrated clearly that, although pre- and post-echoes are formed as early as in the cutting of the master lacquer, these are at a low level (trace b in the illustration left).

Direct Metal Mastering (DMM) eschewed the need to electroform a metal master from the lacquer. Instead, the metal mother was cut directly. The ability to bypass the first electroforming stage greatly enhanced the pre- and post-echo performance of DMM mastered records.

As a matter of historical interest, Stephani points out that older wax masters and copper electroforming process which predated nitro-cellulose lacquer masters and nickel suphamate processes brought in at about the time of the introduction of microgroove records did not suffer from the same pre-echo formation effects during electroforming. In this way we can see DMM as the last piece of the jigsaw puzzle of modern record production.