We entirely agree with, J. Walton who wrote in an important article in 19671.

It is necessary to concentrate mainly upon this factor of " trackability " as the first essential in gramophone pickup performance. All other measurements (including that of frequency response) depend first of all upon proper tracking - that is, the continuous and consistent contact between stylus and groove wall without which no consistency of measurement can be obtained any more than if one tries to measure the performance of an audio amplifier when overloading it to, say, twice its rated maximum output!

The moving assembly of a phono cartridge has one, apparently simple, duty: to transfer the motion of the stylus tip at one end of the cantilver to the moving elements of the electrical transducer at the other end.

These three parts (stylus tip, cantilver and the moving elements of the electrical transducer) constitute the mass of moving system and one of the design goals in cartridge design is to minimise the mass of this assembly; and especially its inertial effect at the stylus point. The pivot of this mass is supported with a flexible, elastomer bearing which, like all springy things, has a compliance 2.

Now there is one inevitable truth concerning any physical system comprising a compliance and a mass: that it possesses a dependance of how it behaves when it is excited by vibrations of different frequencies. And that is the real issue with the design of phono cartridges for good trackability: that there exist conflicting requirements in achieving good tracking ability simultaneously in the low, mid, and high frequency regions.

To quote from a Shure technical document3,

The demands upon the elastomer bearing are different for each part of the total spectrum. In the low-frequency region (below approximately 1,000 Hz) where recorded amplitudes are of main concern, the stiffness of the bearing limits trackability and, therefore, it should be highly compliant. To track all audio frequencies below about 4,000 Hz, the damping properties of the bearing should be low, because of high recorded velocities. Above 4,000 Hz, the ideal bearing would have a large amount of damping to enhance trackability as the stylus resonance frequency is approached. Additional bearing stiffness may also be desirable to raise the stylus resonance beyond the audio limit of 20 kHz. Also to be considered is the need to limit compliance for sub-audible or warp performance. It is apparent that because of these conflicting requirements the bearing cannot, be ideal over the entire spectrum.

Later in the same seminar4, the point is put more forcefully still,

The material qualities [of the elastomer bearing] can... be defined...... the material should be stiff in the subaudible region, compliant in the low- and mid-frequency region, and then stiff again in the very high-frequency region - not an easy requirement to satisfy!

The visualisation of the mechanism of the cartridge and its interactions with the disc is greatly aided, if you have an electrical engineering background, by an equivalant circuit analogy.


How do you test for tracking?

Now, it turns out that it's one thing to claim that tracking matters more than anything else, but another to devise a good method to test for it!

The industry standard test consists of taking the cartridge through a series of Labours of Hercules in the form of 300Hz test tracks of increasing displacement (and thus of velocity and acceleration).

The initial band in this test is usually about +6dB relative to standard recording level of 7cm/s (peak, equivalent to 5cm/s RMS)5.

All decent cartridges should be able comfortably to track the first few bands of this test sequence up to a level which is +12dB relative to standard recording level; a modulation of 90µm peak-to-peak (usually referred to as 45µm peak). Indeed, this is the band on which harmonic distortion tests are usually performed.

The bands of 300Hz modulation then increase through various levels6 to a final modulation of +18dB relative to reference level; a physical peak-to-peak modulation of 180µm (90µm modulation peak).

Testing for tracking involves the simple process of lowering the stylus on these bands of increasing modulation and listening for the point that the stylus mistracks. This is betrayed by a change in the tone so that - to the pure note somewhere between D and D# above middle C - a rasping, octave buzz is added.

Ideally, listening is augmented by looking at the waveform of the stylus signal (suitably amplified, but not equalised) on a display. An osilloscope or the waveform display on a DAW may be used. The cartridge's ability to track is defined by the peak modulation of the last band in which the stylus negotiates the groove without mistracking. Thus we see a tracking specification such as: Tracking ability (300Hz): 80µm lateral.

The problem of these tests at 300Hz is that they only test the tracking performance of a cartridge in the low-frequency region where compliance dominates the proceedings. The test thus tends to favour high-compliance over the two other important parameters (effective mass and damping). Some impression of the artificiality of this test is given by plotting the groove velocity of the final test track (90µm peak) on the famous curves derived by Shure of theoretical and measured groove velocities (left)4 & 7.

That this test is well outside the standard (grey) operating-envelope of the cartridge is obvious. But this test is also misleading and its wide adoption of a measure of tracking ability allows a great many cartridges with poor HF tracking to escape detection. An especially serious situation because HF mistracking is known to cause immediate groove damage3.

The remedy to this is actually quite simple and that is to include middle- and high-frequency tests for tracking too. There exist some examples of sine wave tests as part of frequency-response sequences on test-records which may be used for this. Ideally, precise HF tracking tests are better devised and special test LPs manufactured. This latter course is the approach taken by Pspatial Audio.

It is true that HF mis-tracking cannot be determined by ear in the same way that the 300Hz tests may be, because the harmonics produced in the process are often way above the hearing-range. Here a 'scope or a DAW display is indispensable - as well as a calibrated AC voltmeter: for sometimes HF mis-tracking is only obvious by a change in level. Armed with these tools any mis-tracking problems are revealed with relative ease.

If wideband tracking tests are performed on various cartridges as we have done at Pspatial Audio, the unpalatable truth emerges that many, apparently capable, cartridges demonstrate severe high-frequency mistracking - and high-price appears to be no guarantee that tracking has been thoroughly investigated. These pickups are not only failing to retrieve the information in the groove, but trashing it for the future too! In general, we have found that moving-magnet types, with the moving elements of the electrical transducer being simpler, tend to be better than moving-coils: a fact not revealed in their 300Hz tracking specification.

It seems to us quite possible that customers, reviewers and designers are largely unaware of this due to concentration on the standard 300Hz tracking tests.

The PHLUX-II active MM cartridge which Pspatial Audio designed in conjunction with Phædrus Audio is designed to offer good trackability throughout the whole audio range and thus the combination of excellent information retrieval with minimum groove damage.

2. So that the entire, static weight of the tonearm is not supported by the elastomer bearing, a suport-wire is sometimes included as illustrated.

3. Getting The Signal From Tip-To-Terminals, Frank J. Karlov. Part of a Shure Technical Seminar in 1978 High Fidelity Phonograph Cartridge. Available from Shure.

5. Standard recording level is equivalent to a displacement of 11.2µm peak.

7. Below is a micrograph of the +18dB (90µm peak) 300Hz test band on a standard test record. The artificiality of this track is demonstrated by the fact that the grooves are triple spaced according to standard groove spacing. And, were it not for the choice of 300Hz with a period of 3.3333mS, inscribed on a disc with a rotation periodicy of 1.8 seconds so that the crests of one rotation of track will only very rarely coincide with troughs in an adjacent groove, the master would be severely over-cut. 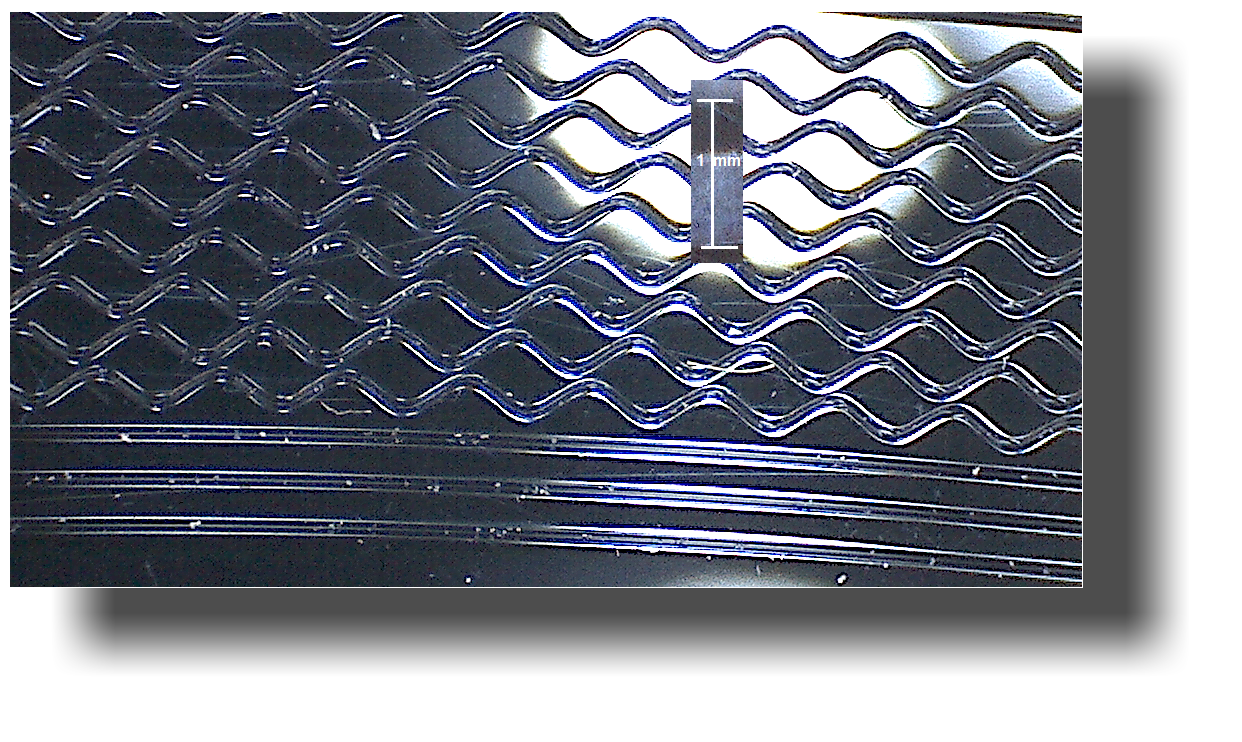